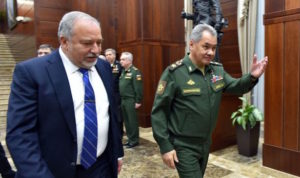 Brief readouts from the Kremlin and Netanyahu’s office said only that the two leaders discussed a “Syrian settlement” and “Iran’s military entrenchment in Syria.”

However London-based, Saudi owned Al-Sharq Al-Sawat quoted “Russian sources” as saying that Israel was given the okay to continue attacks on Iranian targets deep inside Syria, as long as regime facilities were not hit.

Russia has previously granted Israel freedom to carry out air strikes in Syria, although recently Moscow has expressed public disquiet about strikes in which Syrian regime and allied troops were killed.

The talks also solidified an agreement between Israel and Russia to ensure Iranian and allied forces vacated the southwest region of Syria adjacent to the Israeli border, according to the report.

According to the Syrian Observatory of Human Rights, the fruits of Russia and Israel’s understanding were already being reaped on Thursday, with Iranian forces preparing to vacate Syria’s southwest as government troops were poised to fill the gap.

However the deal elicited concern from Washington, Israel’s top ally, with a US military spokesman telling i24NEWS they are “concerned” by the reported Syrian advance, which will almost certainly involve armed confrontation with rebel groups the US sought to protect under a “de-escalation” deal brokered last year.

“We are concerned by these reports of an impending Syrian regime operation in southwest Syria within the boundaries of the de-escalation zone previously negotiated between the US, Jordan and Russia,” U.S. Army Lt. Col. Earl Brown from the US Central Command said.