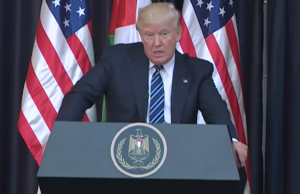 A spokesman for Palestinian Authority President Mahmoud Abbas said Tuesday that President Donald Trump informed him in a telephone conversation that he intends to move the US embassy in Tel Aviv to Jerusalem, prompting the Palestinian leader to warn him of the “dangerous consequences” of such as step.

Trump planned to hold, or held, telephone conversations on Tuesday with a number of Middle East leaders, including Prime Minister Benjamin Netanyahu, Abbas and Jordan’s King Abdullah, White House spokeswoman Sarah Sanders said, in advance of his expected announcement about the US embassy in Israel.

Despite the reports, Netanyahu instructed his ministers “not to talk about the embassy issue until there is a statement.”

A Palestinian security official told Ynet that the decision would “explode the situation and the streets. We will go back to zero and it could ignite an intifada.”

The official added that the issue of Jerusalem is too sensitive for games. “All the security crises in the last 20 years are connected to Jerusalem,” he said. “From the Western Wall tunnel riots in 1996, Ariel Sharon’s visit to the Temple Mount in 2000 to the security escalation in 2015-2016.”

“The president has calls scheduled this morning with Prime Minister Netanyahu, King Abdullah of Jordan and Palestinian Authority President Abbas. We will have a readout on these calls later today,” Sanders said.

Trump was expected to announce as soon as Wednesday that he will again delay moving the US embassy in Tel Aviv to Jerusalem but stress that he wants to do so, a senior administration official said. The official said Trump was also likely to say that the United States recognizes Jerusalem as the capital of Israel.

The US president was also reported to have spoken with Abbas on the phone, amid reports the United States is planning to formally recognize Jerusalem as the capital of Israel, a source familiar with the call said. During the phone call, Abbas warned Trump of the “dangerous consequences” of the embassy move.

A senior administration official said last week that Trump would likely make the announcement on Wednesday, a step that would be welcomed by the Israeli government, but has sparked disapproval and outrage in many Arab countries.

Trump adviser and son-in-law Jared Kushner said the president had not yet made a final decision.

Iraqi Prime Minister Haider al-Abadi was the latest Arab leader to express his opposition to the move, warning on Tuesday of such a decision’s ramifications.

Abadi’s comments at a weekly news conference joined a mounting chorus of voices saying the move would unleash turmoil.

The European Union, the Palestinian Authority, Saudi Arabia, Turkey, and the Arab League all warned any such declaration would have repercussions across the region.