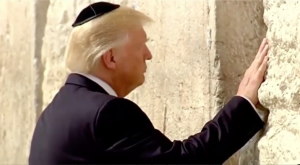 The report, to which there was no immediate confirmation, followed a speech US Vice President Mike Pence gave a day earlier in which he said that Trump was “actively considering” the step.

“While for the past 20 years, Congress and successive administrations have expressed a willingness to move our embassy, as we speak, President Donald Trump is actively considering when and how to move the American Embassy in Israel from Tel Aviv to Jerusalem,” Pence said at an event celebrating the 70th anniversary of the UN vote on the Partition Plan.

According to the television report, Trump does not want to once again sign a waiver – which he did on June 1 and which is up for renewal every six months – blocking implementation of a law passed by Congress in 1995 mandating that the embassy be moved.

Trump pledged repeatedly during his campaign to move the US embassy from Tel Aviv to Jerusalem. After Trump signed the waiver in June, various administration officials said moving the embassy was a matter of “when, not if.”

The Palestinians, as well as some Arab leaders and top US officials, have warned that such a move would trigger an uproar and violent unrest in the territories and in Arab capitals that could ruin current US efforts to push the diplomatic process forward.

Israel’s argument is that moving the embassy would correct a historical anomaly, whereby the US does not recognize Jerusalem as Israel’s capital. It would also force the Arabs and the Palestinians to wake up from a long-harbored fantasy that they could disassociate Israel and the Jewish people from Jerusalem.

If as a forerunner to moving the embassy, Trump formally recognizes Jerusalem as Israel’s capital, he is likely to make clear that the recognition is only of west Jerusalem in order to keep the final status of the entire city something to be determined in negotiations.

Russia announced in April that it recognizes west Jerusalem as Israel’s capital, becoming the first country in the world to do so. That announcement was met by silence both in the Palestinian territories and in the Arab world.