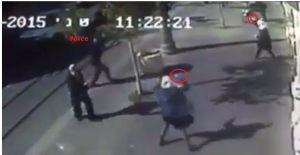 The investigation was launched following the so-called “scissors terror attack” last month near the Mahane Yehuda market in Jerusalem, by two teenage Arab girls. Attorney General Yehuda Weinstein and State Attorney Shai Nitzan decided to launch the investigation based on suspicion that the policeman shot one of the terrorists when she was already on the ground after having been “neutralized.”

The policeman said that he fired because he felt that the terrorist still posed a danger.

Internal Security Minister Gilad Erdan (Likud) criticized on Monday the decision to launch an investigation against the policeman who shot the two “scissor terrorists” in Jerusalem last month, near the Mahane Yehuda Market.

The Justice Ministry’s Department for Investigations of Policemen (Mahash) summoned the policeman to questioning following complaints that he fired at one of the two female terrorists after she had already been “neutralized” and was lying on the sidewalk.

Erdan said: “I am saddened by Mahash’s decision to investigate the police sapper who thwarted the Jerusalem terror attack perpetrated by two teenage girls, known in the media as the ‘scissor terror attack.'”

“I cannot understand why people are always trying to judge the security forces for split second decisions at the scene of a terror attack, as if this was a laboratory and one could know, in a single moment, what other weapons or explosives are on the terrorists’ bodies, and whether they are completely sapped of strength or can still stab anyone who comes near them,” he added.

The attack three weeks ago was perpetrated by two teenage girls, aged 14 and 16. They managed to lightly wound a 70-year-old man, who they thought was a Jew but was in fact an Arab. One terrorist was killed and the other has been indicted. She has said she intends to sue the policeman who shot her.