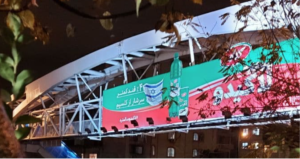 The Israeli flag is a banned symbol in the Islamic republic, which has waged a war-by-proxy with Israel for decades.

The banner read “Thank You, Mossad”, apparently a reference to the recent killing of Iran’s top nuclear scientist, Mohsen Fakhrizadeh.

Fakhrizadeh’s killing has been widely attributed to Israel’s Mossad, though Israel has not formally acknowledged any role in the assassination.

Iranian leaders eulogized Fakhrizadeh as a martyr, and gave the slain nuclear scientist military honors during his funeral.

Monday’s apparent act of defiance against the Iranian government is not the first time the Israeli flag become the center of public expressions of dissent.

In January, Iranian protesters demonstrating against their country’s government were seen avoiding giant Israeli and American flags on the ground during their demonstration, so as to not trample them.

Video from student protests in Tehran shows thousands of demonstrators carefully walking around the two giant flags, which had been put on the ground to encourage passersby to trample them in a sign of contempt.

Unlike Iran’s politicians & military, bursting with bravado & bluster, the brave Parsi people have had enough of their corrupt dictatorial leaders. They’re lining up to volunteer for the Mossad, since our goals are identical.

– Bravo! Their courage is inspiring!