In its statement Jaish al- Ummah, whose name means “Army of the Nation,” says Muslims are called to jihad to confront the infidels America & Israel as well as those who follow them.

Gaza-based Salafist-Jihadists with ties to al-Qaida have claimed responsibility for perpetrating several of the recent rocket attacks against Israel, according to statements published by several jihadist groups in the past days. 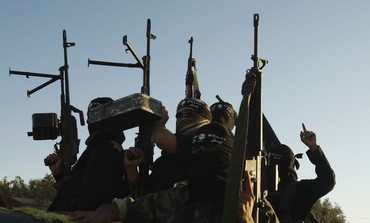 The Gaza-based jihadi group Jaish al-Ummah published two statements on jihadist forums on Monday claiming responsibility for a series of attacks against Israel.

In its statement Jaish al- Ummah, whose name means “Army of the Nation,” says Muslims are called to jihad to confront the infidels America and Israel and those who follow them.

Jaish al-Ummah said it was “responding to the aggression suffered by the forbearing people of Gaza after the firing of many missiles on several fronts,” and listed a series of attacks it claims to have perpetrated.

In a second statement the group claimed responsibility for firing nine 107 rockets at Sderot, Eshkol and Ashkelon on Thursday and Friday, and a Grad rocket at Beersheba.

It is probable that Jaish al- Ummah waited until Monday before making its statement in order to ascertain from Israeli media reports where the rockets it fired hit.

The group concluded by vowing to “continue our jihad against the infidels and taghut [tyrants, opposers of the prophet Muhammad] of the earth until the law of Allah is established.”

According to Jane’s World Insurgency and Terrorism, Jaish al-Ummah is a little-known group, which according to its leader, Abu Hafs al-Maqdisi is comprised of Salafist members of other terror groups in Gaza.

JaU’s primary stated objective is the destruction of the State of Israel and the establishment of an Islamic emirate in Palestine governed under the Salafist interpretation of Shari’a law.

A second Salafist group, the Mujahideen Shura Council in the Environs of Jerusalem, published a short video statement to jihadist forums on Monday, also claiming responsibility for firing eight rockets at Sderot and Ashkelon.

The video, titled “Bombing the usurped Sderot and city of Ashkelon with eight rockets,” opens with the verse from the Koran used by Mujahideen Shura Council as the name of its “rocket campaign:” “Expel them from wherever they have expelled you.”

Both Jaish al-Ummah and the Mujahideen Shura Council have previously expressed their opposition to Hamas, which in turn has found itself in conflict with the Salafist Jihadists groups.

The Salafist groups disagree with Hamas on key issues including confrontations with Israel and how Islamic rule and Shari’a law should be practiced in Gaza.

In October, Jaish al-Ummah accused Hamas of arresting and torturing six of its members including its leader, Hafs al- Maqdisi.

The Mujahideen Shura Council also opposes Hamas, which it has accused of collaborating with Egyptian and Iranian intelligence. Earlier this month, before the rocket attacks that led to Operation Pillar of Defense began, a leader of the group said there was “no relationship between the Salafist Jihadists and Hamas except through security prosecutions and in prisons.”

While Gaza’s Salafist Jihadists have taken advantage of the conflict with Israel to conduct separate attacks against the Jewish state, according to reports in Egyptian media Salafist Jihadists from Sinai are assisting Hamas in its fight against Israel.

On Monday, Egyptian daily Al-Masry al-Youm cited Salafist leader Sheikh Muhammad Muftah as saying that the majority of Sinai’s Salafists had traveled to Gaza, and that Islamists from the rest of Egypt would also join them in the upcoming days.

Salafi Jihadists held an emergency meeting over the past days to discuss ways they can support Gaza, including by preparing more people to travel to the Strip, Al-Masry al-Youm said.

The Egyptian daily quoted Murgan Salem, a leading Salafist Jihadist, as saying that support for the people of Gaza was ongoing, and included financial support as well as by sending jihadists to the strip.

The report also cited wellinformed sources in the Muslim Brotherhood, from which Egyptian president Mohamed Morsi hails, as confirming that a group of ten Brotherhood youths have also traveled to Gaza to join the Izzadin Kassam Brigades, Hamas’s military wing.

However, a member of the Muslim Brotherhood’s Consultative Council told Al-Masry al- Youm that the youths’ decision to travel to Gaza “did not represent the Brotherhood.”

Muhammad Zakaria Sha’aban said that those taking the personal decision to travel to Gaza would be held accountable.

Sha’aban said that the group did not intend to permit its members to travel to Gaza for jihad, that there was no need for young people to leave Egypt for jihad at the moment, and that the Brotherhood’s youth members had a binding obligation to their leaders,Al-Masry al-Youm reported.