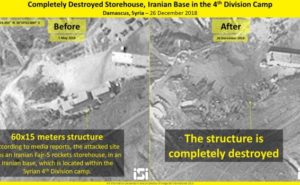 London-based war monitor Syrian Observatory for Human Rights said Wednesday that three weapons facilities, belonging to Iran and Hezbollah, had been targeted outside Damascus overnight between Tuesday and Wednesday.

The ISI report included a survey of the targeted area, focusing on a reported Iranian weapons facility inside the Division 4 camp. The report further concluded that there was no evidence of attacks on the airport in Damascus or in Al-Kiswah.