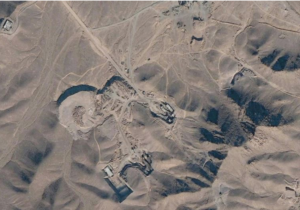 The satellite images show a number of activities at the Fordow nuclear research plant that haven’t been detected in recent months, such as a large presence of buses and vehicles, as well as new large buildings which iSi believe are for R&D (research and development) and assembly.

One of the satellite images shows an opened gate to the facility’s uranium enrichment tunnels, which the iSi says it has not observed in recent months.

However, on February 1, the spokesman for the Atomic Energy Organization of Iran (AEOI), Behrouz Kamalvandi, said that “we are at the stage of installing some equipment and Russian experts will arrive in Iran on Sunday to begin the installation work.”

On the same day AP quoted Russia’s RIA Novosti news agency as saying that the Russians were set to arrive at the Fordow nuclear facility later that week.

Tensions over the Iran deal culminated this week when Israel’s Prime Minister Benjamin Netanyahu revealed that Mossad has gathered intelligence which indicates that Iran is cheating on the deal.

Netanyahu delivered a PowerPoint presentation, displaying thousands of original “incriminating” files part of half a ton of material from an archive of “Project Amad,” the name he said was given to “Iran’s comprehensive program to design, test and build nuclear weapons.”

“After signing the nuclear deal in 2015, Iran intensified its efforts to hide its secret files,” he argued.

He blasted Iran for denying the existence of its nuclear program to the IAEA and for continuing to expand it after the 2015 JCPOA (Joint Comprehensive Plan of Action), the formal name for the agreement with Iran.

On Thursday, Reuters reported that US President Donald Trump has essentially “all but decided” to pull the US out of the accord, according to three people familiar with the White House’s thinking.

Trump has pilloried the agreement designed to curb Iran’s nuclear program as “insane” and “ridiculous” and called for fresh measures to counter Iran’s ballistic missile program and support for militant groups across the Middle East.

If Trump decides to withdraw from the accord, the ‘waivers’ that were implemented to suspend US sanctions on Iran will be reinstated, which in turn could lead to Iran re-establishing its nuclear arms program, or making life difficult for the US through proxies in countries such as Iraq, Lebanon, Syria and Yemen.

Iran has said that it will not remain in the nuclear deal with world powers if the United States decides to quit the accord, a senior adviser to supreme leader Ayatollah Ali Khamenei said Thursday.

“If the United States withdraws from the nuclear deal, then we will not stay in it any anymore,” foreign policy adviser Ali Akbar Velayati was quoted as saying by the state television website.

European leaders, including French President Emmanuel Macron, have been pressing Trump to strengthen rather than abandon the three-year-old deal that took more than a decade to reach.

Macron, who met Trump in Washington last week to try to convince him to not walk away, admitted Wednesday he still did not know what decision the US leader would take.