A group of Temple Mount activist movements appealed over the weekend to Israel Police Commissioner Yohanan Danino to take immediate action to stop the desecration of the “Holiest of Holies” on the Temple Mount by the Muslim Waqf.

According to activists, the body responsible for the site and charged with carrying out renovations to the Temple Mount chose to erect scaffolding directly on the Foundation Stone (Even Shtiya) – the holiest place for Jews, and which Muslims also honor. 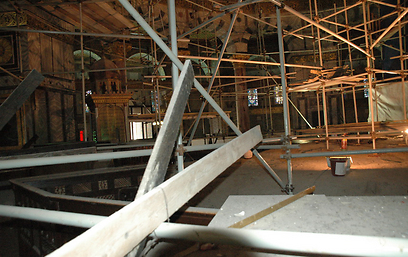 In an “urgent plea” to Danino, attorney Aviad Visoly claimed in the name of the Temple Mount groups that photos published in the national-religious weekend paper ‘Makor Rishon’ showed the holy stone covered by “building material, rubble, and tools.”

According to Visoly this comprises desecration of a holy place specified as such in Protection of Holy Places Law – an act punishable by seven years behind bars.

“To the best of my knowledge, the Jerusalem District Police commander and his officers in the David region know about this, and are doing nothing to stop the crime,” Visoly wrote, adding that various Temple organizations had issued repeated warnings about “indifference, contempt, and even hostility” on the part of the police regarding preserving the Temple Mount’s holy status. Now, he said, he demanded that Danino stop the desecration of the Drinking Stone immediately, and bring those responsible to trial.

“The Muslim Waqf, Hamas, and even the Iranian government declare morning and evening that they are working to eliminate every shred of the Jewish people’s holiest of holies from the Temple Mount,” Visoly’s letter concluded. “That the upper echelon of the Israel Police is, intentionally or not, cooperating with them is outrageous, revolting, and incomprehensible.”

In a separate message, the Temple organizations used an even more drastic tone, calling for Jerusalem District Police Chief Nisso Shaham to resign. “As Ramadan approaches, Shaham is, as usual, trying to buy Muslim quiet on the Temple Mount – even at the price of destroying the Jewish people’s most holy assets.”

The Joint Forum is also calling on MK Uri Ariel, chairman of the State Control Committee, to publish a report on the subject that has yet to be released. The various groups explained that “only then will there be a change to fix the severe problems in the conduct of those responsible for enforcing the law on the Temple Mount – the same conduct that has already caused tremendous damage to the remains of the First Temple and the understanding of the Temple Mount’s history.”

“Without purifying sunlight, dirt spreads, and even the Holiest of Holies is being trampled, desecrated, and destroyed. Jewish inscriptions that survived there and in the cave under the Foundation Stone have been cut out by hostile hands, and there is concern about the fate of other important historical artifacts that are in danger of being annihilated.”

The police said in response that they would respond as soon as they were asked by the district command to do so.

The Al-Aqsa Foundation, the organization in charge of preserving Muslim holy sites in Israel, has expressed its appreciation of the Waqf’s efforts to maintain and renovate areas around the Al-Aqsa Mosque, “despite all the obstacles that Israel puts up,” the group said in a response to the Temple Mount activists’ complaint.

“The entire Islamic nation stands beside the holy (sites) division… and supports its role in protecting and preserving the Al-Aqsa Mosque. Neither Israel nor any of its arms has a right to interfere in the matters of the blessed Al-Aqsa Mosque.”