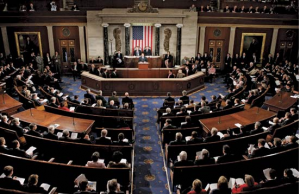 The letter, initiated by Sens. Kirsten Gillibrand (D-NY) and Mike Rounds (R-SD), cites Obama’s 2011 General Assembly address in which he said, “Peace will not come through statements and resolutions at the United Nations.”

“As you prepare to attend the United Nations General Assembly, we write to address the issue of Israeli-Palestinian negotiations,” the senators wrote in the letter.

“At a time of great challenges in the Middle East, we are disappointed that talks between Israelis and Palestinians remain stalled,” they added, then said, “The only way to resolve the conflicts between the two is through direct negotiations that lead to a sustainable two-state solution with a future state of Palestine living in peace and security with Israel. This outcome would provide Israel with greater security and strengthen regional stability. We remain optimistic that, under the right circumstances, Israelis and Palestinians can successfully resume productive negotiations toward this goal.

“Your administration has consistently upheld the longstanding U.S. policy of opposing — and if necessary vetoing — one-sided UN Security Council (UNSC) resolutions,” the senators wrote, adding, “The only way to resolve the conflicts between the two is through direct negotiations.”

The letter cautions that the international community should “avoid taking action that would harm the prospects for meaningful progress.” It add,: “Even well-intentioned initiatives at the United Nations risk locking the parties into positions that will make it more difficult to return to the negotiating table and make the compromises necessary for peace. The United States remains an indispensable trusted mediator between the parties, and we must continue to insist that neither we nor any other outsider substitute for the parties to the conflict.”

The 88 senators who signed the letter were commended by AIPAC in a statement on Monday.

The letter comes after 394 members of the House of Representatives signed a similar letter last April, urging Obama to oppose UN initiatives that circumvent direct peace negotiations and seek to impose a solution.

The Palestinian Authority (PA) has several times initiated unilateral resolutions at the UN Security Council which seek to condemn Israel over its construction in Judea and Samaria and force a peace settlement on the Jewish state.

In 2014, the PA submitted a resolution to the UN which called for Israel to “end the occupation” – that is, to withdraw from Judea and Samaria – by 2017.

The draft resolution would have set a 12-month deadline for wrapping up negotiations on a final settlement and the end of 2017 as the time frame for completing an Israeli withdrawal from Judea and Samaria.

In April, the PA introduced yet another unilateral resolution that would declare Israeli “settlements” as illegal.