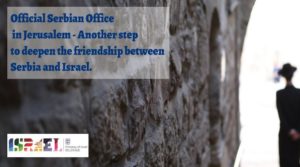 “That’s our way of showing respect to the Jewish people as well,” added the Serbian President.

Vucic has had a close relationship with Israel since taking office. Last month, he flew a yellow flag to mark Holocaust Remembrance Day at his official residence in in the capital of Belgrade.

This badge was a symbol of the attempted destruction of the Jews by the Nazis. Now it is a symbol of honor. 75 years after. Never again. pic.twitter.com/uBy1BiK7DT

The flag, which bears a Star of David and the word “Jude,” is meant to evoke the yellow star badge that Jews were forced to wear during the Holocaust.

Vucic tweeted a photo of the flag with the words “This sign was a symbol of an attempt to destroy the Jewish people by the Nazis. Today it is a badge of honor. 75 years later. Never again.”