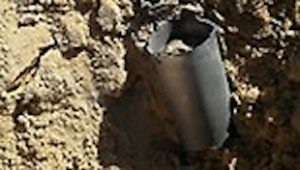 IDF & Israel Police are still searching for rocket debris to verify that it fell inside Israel, while examining the possibility it may have exploded in midair.
– No reports of injury or damage caused from the incident.

A rocket was launched from the Sinai Peninsula at Israel early Tuesday. There were no reports of injuries or damage.

The IDF is searching for the rocket to see if it fell inside Israel. It is examining the possibility the rocket exploded in midair. The Code Red rocket alert siren was not sounded when the rocket was launched as it was projected to land in an open, uninhabited area.

On the eve of Passover, ISIS terrorists in Sinai launched a rocket that landed in a greenhouse in the Eshkol Regional Council. No one was physically hurt was damage was caused to the greenhouse. A 50-year-old man was treated for shock.

Several weeks earlier, a rocket landed in an open area in the Hof Ashkelon Regional Council. No one was hurt in that incident either. The IDF retaliated by attacking Hamas targets in the northern Gaza Strip