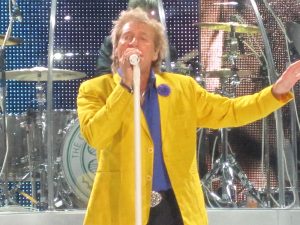 With his distinctive raspy singing voice, Stewart came to prominence in the late 1960s and early 1970s with The Jeff Beck Group (1967-1969) and then Faces. He launched his solo career in 1969 with his debut album An Old Raincoat Won’t Ever Let You Down.

With his career in its fifth decade, Stewart has achieved numerous solo hit singles worldwide, most notably in the UK, where he has garnered six consecutive number one albums. He has sold over 130 million records worldwide, and is one of the best selling British singers of all time. He was voted at #33 in Q Magazine’s list of the top 100 Greatest Singers of all time.

As part of his worldwide ‘HITS 2017’ tour, Stewart will naturally be performing all the massive hits from his incredible career, classic rockers like “Maggie May,” “Baby Jane”and “Da Ya Think I’m Sexy” through to big ballads such as “Sailing,” “You’re In My Heart,” and “Tonight’s The Night.”

“I’m looking forward to performing in Tel Aviv in June. I promise to deliver a fun, energetic show. I’ll be playing your favorite hits, with a few surprises too. I give you fair warning – fasten your seat belts. I’m pulling out all the stops,” announced Stewart in a recently recorded video statement.