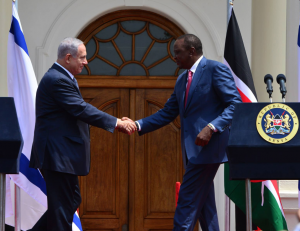 Prime Minister Binyamin Netanyahu has made strengthening Israel’s ties with Africa a priority with the stated goal of breaking the automatic anti-Israel majority at the UN.

A senior South African diplomat said today that his country would boycott a planned summit in two months in Togo because it was “designed to normalize the relations between the African countries and a country whose sole concern is the occupation of another people.”

He added that Israel “behaves in a shocking manner when it maintains a blockade of the Gaza Strip and causes great suffering to the Palestinian population.”

The official said that South Africa would call on other countries to hold a dialogue on the need to boycott Israel and not strengthen relations with the Jewish State. “We can not turn a blind eye to the Israeli efforts to enlist support from Africa and elsewhere in order to undermine the Palestinian cause.”

South Africa is not alone in fighting Israel’s return to Africa. Several Muslim nations, including Morocco, Algeria, Tunisia and Mauritania, have also stated that they were against the strengthening of ties with Israel.

Prime Minister Binyamin Netanyahu has described Togo’s agreement to hold a joint conference for Africa and Israel as “the best evidence of the success of our policy, of Israel’s presence in Africa.”

Last week, the South African parliament refused to meet with five Israeli MKs who visited the country and are still there. The delegation was headed by MK Nachman Shai, who sought to meet legislators from the local parliament, but the meeting was rejected by the ruling party, headed by South African President Jacob Zuma. However, members of the opposition agreed to meet with their Israeli counterparts.

The purpose of the delegation was to visit the Jewish community of the country, which has a population of close to 65,000, and is closely linked to Israel.

The Foreign Ministry told Arutz Sheva in response: “Israel’s return to Africa is a strategic move led by the Prime Minister which we are involved in. We know that there are countries hostile to Israel who are trying to prevent this, and we believe that the will and effort of the Israelis will persevere and we will be able to realize our plans in cooperation with the countries of Africa.”