African migrants come to terms with imminent deportation as Immigration Authority inspectors sweep through major cities: ‘Now we are free to return to an independent country’

“All South Sudanese migrants want to go back home. Israel is not our country,” one migrant told Ynet Monday as dozens of Africans were detained nationwide ahead of their deportation.

“When I came here my country was at war and it was dangerous,” said John, who crossed into Israel from Egypt five years ago and settled in Eilat. “Now I’m ready to go back. I think all African migrants should go back to their countries.”

I met another South Sudanese migrant, Kavel, outside a Bank Hapoalim branch in Eilat, where, like John, he worked at a hotel. “I’m on my way to the Immigration Authority right now to say that I am willing to return to South Sudan voluntarily.

“I believe all migrants from South Sudan want to go home. I don’t want to stay. I arrived five years ago when I didn’t have a country or security, but now we are free to return to our country,” he said.

“I’ve been unemployed for two months now. I don’t have a visa or an HMO card. I want to thank the State of Israel. There are good people here, and I have many Israeli friends. I just want what everyone else wants – peace.” 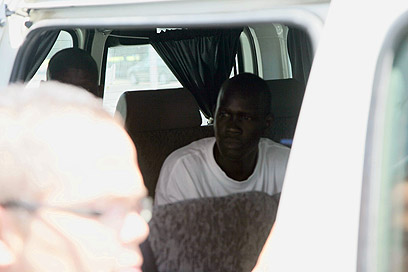 The Population and Immigration Authority’s force’s latest operation was made possible after the Jerusalem Administrative Court granted the State’s request to suspend the “collective protection” status granted to south Sudanese migrants in Israel, effectively sanctioning the deportation of 1,500 migrants.

According to the Immigration Authority, over 55 foreigners – from China, Ghana and the Ivory Coast – were detained in the first hours of the sweep, which is set to last several days.

Several African migrants were detained in south Tel Aviv. Shlomo Mizrahi, who works at a local furniture store, said “about 10 Africans passed by my store. Immigration Authority inspectors checked their identification cards, and those who were from South Sudan were taken away in three vehicles that were parked nearby. The operation was bad for business, because it frightened people away.”

Another Israeli who witnessed the arrests said, “It’s good that they are being taken away; they should have been evacuated yesterday. Our businesses here were hurt due to their presence. The authorities should begin evacuating migrants in larger numbers.”