Spain: If you restore it, Israelis will come

Seeking to attract more Israeli tourists, Spain is investing tens of millions of euros in restoring ancient synagogues and Jewish cultural sites. Yes, including a revival of kosher cuisine

Despite the economic crisis and the new austerity measures affecting Spain recently, more than a few of the country’s local authorities are ready and willing to allot funds for the restoration of the country’s Jewish past. With good reason – Spain has seen a consistent rise in the number of Jewish and Israeli visitors in recent years.

An article published recently in the Spanish newspaper “La Vanguardia” indicated that in six years, Israeli tourists have increased their spending in Barcelona by a factor of four. In 2005 Barcelona realized 3.5 million euros in Israeli tourist credit card revenue. In 2011 that amount had jumped to 14.7 million euros.

The Barcelona city government is taking the numbers seriously and trying to bring even more Israelis to the city, as well as Jewish tourists from other countries, through exhibitions and restoring sites of interest.

Red de Juderias de Espana (Trail of Jewish Cities in Spain) is a non-profit association founded in 1995. “At the time there were eight cities. Today, they number 23,” said Assumpcio Justo, the organization’s general secretary.

According to Justo, “in the past four years 20 million euros have been invested in restoring Spain’s historic Jewish sites. Every member city invests – to one degree or another – in developing archeological projects; restoring historic buildings – including synagogues – and of course historic sites. We supply knowledge and consultation.” 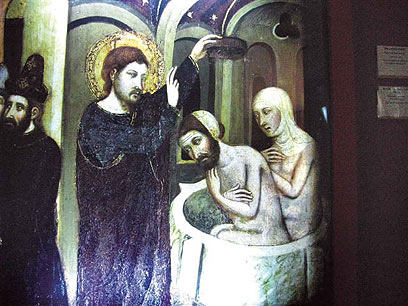 A detail from the Jewish museum in Girona. Photo: Tamira Zedkiyahu-Hasson

Justo says that the funds are provided by each city individually, either from the public coffers or from external sources.

The development of Jewish historical sites sparks economic growth: “A visitor who comes because of Judaism also enjoys the other things a city has to offer, like hotels, restaurants, and museums,” Justo adds.

Take, for example, the Catalonian city of Besalu. It’s restored mikve (ritual bath) and excavated remnants of a synagogue dating back to 1264 have successfully drawn Israelis, who now top the list of foreign tourists, comprising slightly more than 10% of the city’s total incoming tourism.

According to the numbers published in “La Vanguardia,” half of all Israeli tourists visiting Catalonia every year pass through Girona, whose municipality encourages restaurants and hotels to pursue certification for kosher Spanish cuisine. City elders are also looking into the possibility of direct flights between Girona-Costa Brava and Tel Aviv.

Tortosa is another example of a Spanish city resurrecting its Jewish past. The city – perceiving Jewish tourism as an important goal – has put some 700 thousand euros into the restoration of Jewish cultural sites, the production of brochures and helping the restaurants in the city’s old Jewish quarter alter their menus to feature Spanish Jewish food.