Can Lego offend the world’s Muslim community? Definitely, according to the heads of the Turkish community in Austria.

A statement was posted on the community’s website that the Star Wars themed Lego model of “Jabba’s Palace” bares insulting similarities to the Hagia Sophia in Istanbul.

The British Telegraph reported the Turkish community publicly demanded that the company apologize for its offense against Islam.

Jabba the Hutt was an arch-villain in the successful Star Wars movie franchise. His palace is the setting to several memorable scenes including Han Solo’s imprisonment and Princess Leia’s short slavery stint. 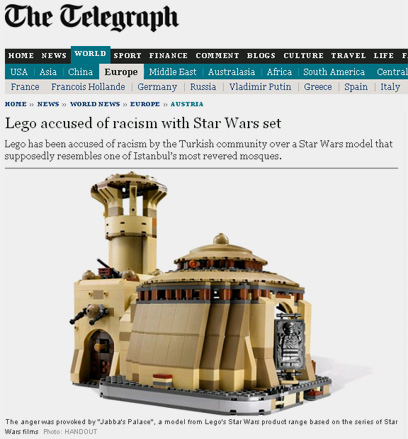 “The terrorist Jabba the Hutt likes to smoke a hookah and have his victims killed,” the Turkish community website said.

“It is clear that the ugly figure of Jabba and the whole scene smacks of racial prejudice and vulgar insinuations against Asians and Orientals as people with deceitful and criminal personalities.”

The Turkish organization said it is considering taking legal action against Lego for inciting racial hatred and insulting human dignity.

The Hagia Sophia was originally a Christian basilica, built during the days of the Byzantine Empire by Constantine the Great around 300 CE.

The church was rebuilt by Emperor Justinian I to become the world largest church.

Through the ages the structure suffered earthquakes, looting, fires and many renovations, and was repurposed by the Ottomans to become a mosque (1453)

Today the Hagia Sophia functions as a church and a museum for Byzantine art.

Lego denied any similarity between Jabba’s Palace and the famed mosque and said the Lego is based on the movies alone.

The Company expressed its regret over the Turkish organization’s mistaken interpretation.