State motions court to postpone project’s deadline after spending millions of shekels in dismantling of evacuated homes,  admits homes might not be fit for accommodation.

The State motioned the Supreme Court on Sunday to postpone by 60 days a High Court deadline for the dismantling of the Ulpana neighborhood homes.

The State admitted that the houses might not be fit for accommodation after they are taken apart in a project which has cost millions of shekels. 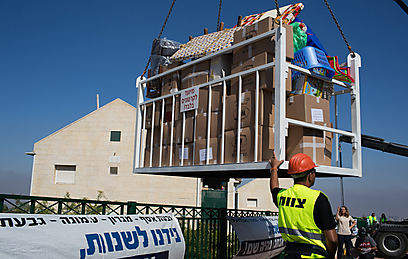 The reason: the houses were not built according to construction plans and differently than what the Defense Ministry had expected. The State further added that there are many safety hazards delaying the project.

Only one house has been successfully dismantled.

Last June, five homes in Beit El‘s Ulpana neighborhood were evacuated on a High Court order after Yesh Din filed a petition on behalf of a Palestinian who claimed he owned the land on which the houses were built.

Prime Minister Benjamin Netanyahu reached an agreement with settler leaders whereby the State will move and not demolish the houses as well as build new homes in Beit El. In exchange, the residents promised not to violently resist the eviction.

The cutting of the houses proved more complex and time-consuming that the State had originally predicted. It has therefore motioned for another extension of the deadline.

The State’s motion reinforced concerns that the enormous amount of funds invested in the project might have been in vain as the relocated houses might not be fit for accommodation.

Aviel Magnezi contributed to this report.