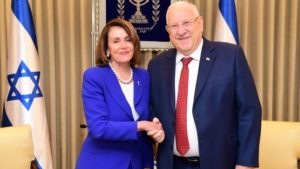 A Pew Research report exposes a partisan divide that has widened considerably, with support for Israel by Democrats plummeting to 27% while Republican support has risen to an all time high.

Support for Israel among US Democrats is dropping sharply, and the party once preferred by American Jews is quickly losing their support

According to a 2018 Pew Research survey, currently, 79% of Republicans say they sympathize more with Israel than with the Palestinians, compared with just 27% of Democrats.

Since 2001, the number of Republicans siding with Israel over the Palestinians has increased 29 percentage points, from 50% to 79%. Over the same period, the share of Democrats saying they sympathize with Israel has declined 11 points, from 38% to 27%.

Among Democrats, the sharp decline over the last few years among those who say they sympathize more with Israel can be seen all across the party, from liberals to moderates to conservatives.

There has been less change since 2016 among Republicans: Large majorities of both conservative Republicans (81%) and moderate and liberal Republicans (70%) continue to say they sympathize more with Israel than the Palestinians.

In spite of some concerns that churches are moving towards a more pro-Palestinian position, the survey shows that white Evangelical Protestants continue to overwhelmingly side with Israel: 78% say this, while just 5% side with the Palestinians.

Today, nearly half of Democrats (46%) say Trump favors Israel too much, a remarkable statistic that reveals the strong anti-Israel sentiments on the Left and another reason Jews are leaving the party. Trump gets high marks from his own party for handling the Middle East. Among Republicans, 73% say he is striking the right balance.

The survey finds that while Republicans and Democrats are deeply divided in views of Israel, so, too, do they differ markedly in opinions about Benjamin Netanyahu, Israel’s prime minister. Nearly three times as many Republicans (52%) as Democrats (18%) have favorable impressions of Israel’s leader.

Democrats’ views of Netanyahu are much more negative. And among liberal Democrats, more than three times as many have an unfavorable view of Netanyahu (49%) than a favorable opinion (15%).

In 2019, a notable number of Democrats within the party are moving further to the left than ever before. The party as a whole is following suit and leaving support for Israel and their Jewish voters behind. With the Jewish vote now leaning hard right, and thus joining with Evangelical Christians, it is likely that once again Israel will be center stage and have a major impact on the 2020 US elections.