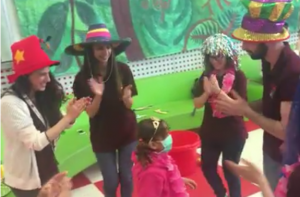 With the help of the Israeli gov’t, the IDF tracked down her family in Syria and covertly spirited her brother to Israel, so a bone-marrow transplant at Rambam Hospital was able to cure her cancer.

A six-year-old girl from Syria who was treated for her wound and a blood disease at Haifa’s Rambam Medical Center was discharged and sent home on Tuesday after her new Israeli friends held a farewell party and gave her with many gifts, including a first-grade backpack — in the hope that her school is still standing.

She was one of the 140 Syrian civilians — men, women and children — that Rambam doctors, nurses and other personnel have treated over the past three years of civil war there. However, the departure of “B” was especially emotional for everyone. Wearing a white dress and shoes and a little silver crown, “B” was the guest of honor at a farewell party held by an entire department, where Jews, Muslims, Christians, and Druse stood together with tears in their eyes, hugging her and worrying about the future that awaits her.

“B” arrived at Rambam’s Ruth Rappaport Children’s Hospital in early February as a small, scared, and wounded child. Once she recovered from the injuries that brought her across the border to Israel, the medical team noted from her blood tests that she suffered from a blood disease that was due to poor bone marrow function. For Israeli children with this disease, the treatment is straightforward and generally yields good results: A bone marrow donor is found, the child is isolated from infection, the bone marrow transplant is performed and, if all goes well, the child recovers.

However, for a Syrian child, the entire process is much more complicated.

At this point, the Israel government stepped in to help “B”’s medical team, led by Dr. Irena Zeidman and Dr. Ayelet Ben-Barak. They managed to reach the child’s relatives in Syria and bring back blood samples from several family members to find out if they were potential donors. “I’ll never forget when they first brought in those test tubes, discreetly wrapped in dish towels,” recalls Iris Porat, one of the nurses who cared for “B” throughout her hospitalization.
Happily, “B”’s brother was a perfect match.

With the help of the Israeli government, “B”’s brother crossed the border from Syria and was brought to Rambam. It took two weeks to complete the bone marrow donation, after which he returned home while “B” and her mother remained in the department, while they and the doctors waited to see if the transplant had succeeded.

It wasn’t easy for the mother and daughter, who had arrived from what is still considered an enemy country, to spend more than six months completely cut off from their family. Grace Yaakov, a social worker in the pediatric oncology department, worked tirelessly to create a support system for the two. Non-profits from the Arab sector, as well as parents of Jewish and Arab patients, all, did their part to support “B”, who sometimes spent weeks in isolation. They showered her with clothing, home-cooked food, books, movies, and games, anything to help the two feel more at home.

The young child was given a backpack for her first year of school. – Rambam Hospital

“B” captured everyone’s hearts with her clever, happy, and curious personality. She especially enjoyed the holiday celebrations and even dressed up in costume for Purim. She also lost no opportunity to share how much she missed her siblings and the spring near her small village, somewhere in the battle zone in Syria. Yesterday, “B’”s hospitalization in here came to an end.

The happy, smiling girl — who said she dreams of one day becoming a fashion designer — entered a room with tables of cakes and gifts, the sound of clapping and the drumming of traditional Arab darbuka drums. A slideshow of photos from “B”’s time at Rambam was shown, and Ashwak El-rabia, an Arab non-profit that assists children with cancer, gave her a tablet in which she could store her memories and a backpack for her first year of school.

After all the parting messages, some of which were painstakingly read in Arabic by Jewish doctors and nurses, the mother asked to read her own thank you wishes. In a small voice, she said “I would lie if I said that I expected the kind of humanity I discovered here. I am grateful for your care and sensitivity; may God protect you. And we will always remember what you did for us.”