IDF on regular night patrol of border with Syria in the Golan comes under direct fire, returns fire at group of unidentified suspects on the Syrian frontier.

An army force on a routine patrol of the border with Syria on the Golan Heights came under fire and shot back at a group of unidentified suspects on the frontier.

There were no injuries among IDF soldiers in the incident. 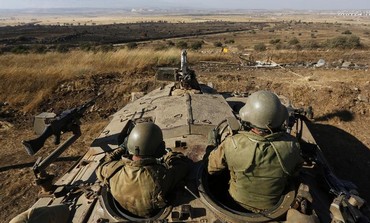 IDF soldiers identified a group of suspects who had entered an unmanned military post along the Syrian-Israeli border.

The suspects did not cross the border fence, but were in Israeli territory when they attacked the IDF, an army spokeswoman said. The results of the return fire are not known at this stage.

The army has launched a search of the area.

The IDF has been placed on higher alert in light of the escalation in the Syrian civil war. Earlier this year, the army fired a Tamuz guided surface-to-surface missile at a Syrian army post following two incidents of gunfire directed at Israeli soldiers.

The missile struck its target, reportedly wounding two Syrian soldiers at a machine-gun nest. There were no injuries or damage reported on the Israeli side, the army said.

Defense Minister Moshe Ya’alon said as he took a severe view of the two shooting incidents from Syria.

The IDF response was in line with government policy, which holds that “every violation of Israeli sovereignty and firing from the Syrian side will be answered immediately through the silencing of the source of fire when it is identified,” Ya’alon said. “We see the Syrian regime as being responsible for all violations of sovereignty.

“We won’t allow the Syrian army or any other element to violate Israeli sovereignty by opening fire at our territory.”