Iran: If we’re attacked by US, Israel will be destroyed in first 30 minutes 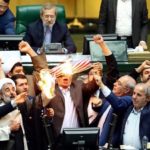 Amid heightened tensions shortly after Iran announced it breached nuclear deal by crossing uranium limits, Mojtaba Zolnour, the chief of the Iranian parliament’s National Security and Foreign Policy Committee threatens the Jewish State saying, “If the US attacks us, only half an hour will remain of Israel’s lifespan.”

Israel will be destroyed in half an hour if the United States attacks Iran, a senior Iranian parliamentarian said on Monday, according to the semiofficial Mehr news agency.

Weeks of tensions culminated last month when US President Donald Trump’s last-minute decision to call off planned strikes on Iran after Tehran downed a US drone. Continue Reading »