Labor repeated its commitment to enter the government, if necessary, should  it come close to reaching a peace treaty on Wednesday, a day after the Arab League said it would be open to land swaps. 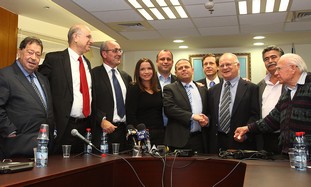 “If we are on the cusp of singing a treaty and [Economic and Trade Minister Naftali] Bennett threatens to quit, we won’t be the opposition, and will reexamine entering the government,” a spokeswoman for Yacimovich explained Wednesday.