Tag Archive for Christians in Defense of Israel 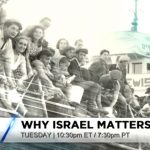 Trinity Broadcasting Network produced the 13-part original series in the Holy Land, featuring a multitude of guests, it sets the record straight on the Jewish State and explores “Why Israel Matters” & why it plays such an important role in the world.

A partnership of Christians groups have collaborated to create a series called “Why Israel Matters,” which intends to set the record straight on Israel and the Jewish state.

Christians in Defense of Israel (CIDI), Liberty Counsel and the Trinity Broadcasting Network (TBN) produced the 13-part original series that demonstrates the crucial importance of the Jewish state to Christians, to the United States and to the world in general. Continue Reading »