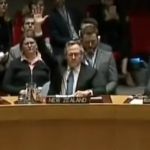 Israeli Foreign Ministry’s policy is to not accept ambassadors who are also serving as envoys to the Palestinian Authority.

Israeli Embassy in New Zealand: Decision is not at all connected to the good working relationship between the 2 countries.

Israel has rejected New Zealand’s new ambassador because he is also an envoy to the Palestinian Authority, officials said Monday.

New Zealand officials said that since 2008, its ambassadors in Turkey have been responsible for covering a large swath of territory. But Israel has refused to accept their latest appointment to the post, Jonathan Curr, who was due to travel to Jerusalem in the coming days to present his papers.

New Zealand’s immigration authorities have started stepping up their enforcement in recent weeks and have been deporting Israelis from the country immediately upon landing. The reason: Fear of Israelis arriving at the country to work illegally in shopping malls carts.