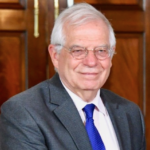 Nominated as EU’s next foreign policy head, Spanish Foreign Minister Josep Borrell once advised the EU about Iranian intentions, saying, “Iran wants to wipe out Israel; nothing new about that. You have to live with it.”
– Regarding the Palestinians, Borrell is in favor of EU countries unilaterally recognizing a Palestinian state.

If past comments are any indication, Spanish Foreign Minister Josep Borrell Fontelles – nominated on Wednesday to be the EU’s next foreign policy czar – will make Israel pine for Federica Mogherini.

And Jerusalem was not particularly fond of Mogherini, for the most part cutting her out of the Mideast loop because of a perceived pro-Palestinian bias. Continue Reading »