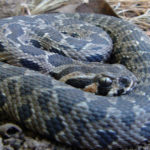 After Israel chose the daboia palaestinae to be its national snake, the Palestinian Authority protested the move, calling it an act of ‘theft’ and an affront to preserve ‘Palestinian identity’.

Last Thursday, Israel’s Society for the Protection of Nature and the Israel Nature and Parks Authority named the Palestine viper as Israel’s national snake.

The Palestine viper, or daboia palaestinae, was selected based on an online vote.

Found across the Levant, from the northern Negev and western Jordan in the south to northern Lebanon and central Syria in the north, the snake is common throughout most of Israel, and in Hebrew is referred to as the ‘common viper’, or ‘common Land of Israel viper’. Continue Reading »