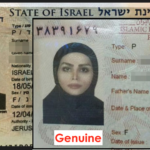 After supplying technical support from Jerusalem, an Iranian couple, both in their 20s, were caught by Ecuador passport control trying to leave for Spain using forged Israel Passports.

Two Iranians have been caught using fake Israeli passports as they attempted to leave the South American country of Ecuador to fly to Spain.

The two, a man and a woman in their 20s, were caught by Ecuador passport control with the forged travel documents, which used personal information of two Israelis – an 11-year-old girl still in possession of her own passport and an adult male who recently reported his passport as stolen. Continue Reading »