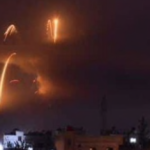 Opposition leaders claimed that a weapons depot situated in the Mezzeh airbase in the capital belonging to Syrian President Bashar Assad’s army was the target of the the attack. Continue Reading »