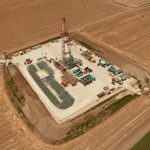 Drilling has officially begun at Zion Oil & Gas new well in the Levant Basin in northern Israel, an area that experts estimate up to 6.6 billion barrels of oil.

For years, Israel Today has been covering the progress of Zion Oil, a company that exists solely to bless Israel (and, by extension, those who bless her – Gen. 12:3) by discovering the natural resources the Bible suggests lie below the surface of the Promised Land. Continue Reading »

Zion Oil & Gas, Inc. (NASDAQ GM: ZN) announced today that it has met and complied with two key conditions set by Israel’s Petroleum Commissioner, enabling it to move toward drilling its next deep oil well, about 40 kilometers (~25 miles) south of the Sea of Galilee, where the Jordan and Jezreel Valleys meet.

The State of Israel produces only a few thousand barrels of oil a day, which means it relies on the global market for more than 99 percent of its consumption.  Continue Reading »

Zion Oil & Gas Inc. announced on Wednesday that it had, after several years of preparation, entered the next stage of its exploratory activity in Israel.

On Sunday, the company began performing a perforation and stimulation operation at its Elijah #3 well in Israel’s northern coastal region, just south of Haifa.

Zion Oil & Gas explained the operation, which it is obligated to perform under its license agreement with Israel’s Petroleum Commissioner, as “a key method of obtaining information on the formation fluid and establishing whether a well has found a commercial hydrocarbon reservoir.” Continue Reading »