The Tayibe Space Center, which was officially inaugurated on Tuesday, does not bear the name of Israel’s first astronaut Ilan Ramon.

Ynet previously reported that Knesset Member Ahmad Tibi had asked Science Minister Daniel Hershkowitz to avoid naming the new center in the Arab-Israeli city after the late astronaut, arguing that

It was eventually decided to downplay the astronaut’s name, with the facility’s sign reading “‘Tayibe Space Center’ – in memory of astronaut Ilan Ramon.”

“Ilan Ramon was the only Israeli astronaut, and the center was established in his memory,” Hershkowitz said. “I believe this center can increase cooperation and fraternity between Israelis and Arabs, and make science accessible to the entire population while narrowing the gaps in the Israeli society.” 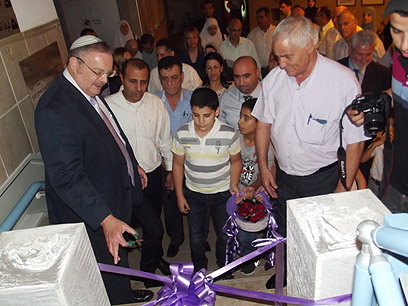 In an appeal to the science minister four months ago, Tibi said he was “shocked to find out that the space center in Tayibe will be named after the pilot Ilan Ramon. Despite the Ramon family’s tragedy and its activity in the field of space travel, we are talking about a fighter pilot who took part in air strikes on civilian populations during the Lebanon war and in attacks in additional Arab countries.”

Minister Hershkowitz said in response that Tibi had “crossed a red line” and is “causing great damage, particularly to the public he represents, and to Israeli society as a whole.”

Hershkowitz also stated that “All space centers in Israel are named after Ramon, and if Tayibe does not want a space center named after him, it won’t have a space center at all. You can’t accept State funds and at the same time ridicule one of its heroes, who fought devotedly against Islamist terror, both in Israel and abroad.”

MK Tibi, who was absent from the ceremony, said on Tuesday that “The science center in Tayibe was named the ‘Tayibe Space center’. However, due to a NIS 50,000 (roughly $13,500) donation by the Ramon Foundation, it was established in memory of Ilan Ramon; I have full respect and empathy towards Mrs. Ramon, and she is welcome to visit Tayibe. However, we must also take Arab population feelings into consideration.”

Following the center’s opening ceremony, a municipality official said: “I think this is a huge initiative for both Tayibe and the triangle area residents. We would love our Jewish brothers from Kohav Yair to join us on this project; We’ve had our difficulties at first, but we defeated them.”