A demonstrator at vigil in front of PM’s Residence remarks, “I feel like not only have we betrayed our own values, but we’ve betrayed our country.”

“We are here to send a very simple message: Those who have murdered shouldn’t see the light of day,” said Elichai Ben-Yishai, the brother of Ruth Fogel, who was brutally murdered in her home with her husband and three children in 2011’s so-called “Itamar massacre.” 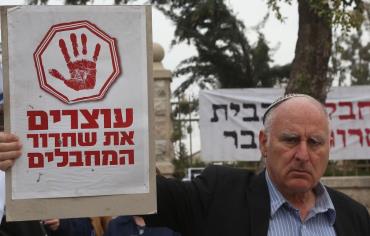 “This should be acceptable and understandable logic to any reasonable person,” he added, with rage and sorrow inflaming his eyes.

Ben-Yishai was joined by dozens of other demonstrators Sunday afternoon at a vigil in front of the Prime Minister’s Residence in Jerusalem to condemn Saturday’s fourth and final round of releases of convicted Palestinian terrorists.

To date, approximately 75 of the 100 convicts have been released as a precondition for ongoing peace negotiations, resulting in three previous emotionally fraught vigils arranged by the Almagor Terror Victims Association, headed by chairman Meir Indor.

However, at Sunday’s fourth gathering, Indor expressed hope that overwhelming public opposition to the final release may gain enough traction to prevent it from coming to pass.

“We have a feeling that this time we might see a change because polls are showing that 80 percent of Israelis are against releasing terrorists,” he said, a few meters from makeshift tent scheduled to be manned until Thursday night.

Indor added that the egregiously insensitive celebrations among Palestinians for the previously released terrorists, compounded by their monetary compensation by the Palestinian Authority, should serve as irrefutable evidence that the releases are counterproductive.

“We’re seeing that it doesn’t pay to release terrorists because they are getting the reception of heroes and large sums of money, so the lesson to young Arabs is: ‘Join the terror group, kill a Jew and you’ll be celebrated and receive money.’” Even if those released don’t kill again with their own hands, Indor said they become alluring “spiritual leaders” who attract “fresh blood” to murder in their stead.

“The killers are interviewed on television and giving lectures, which gives them higher status that the younger Palestinians want to emulate by becoming killers themselves,” he said. “They are treated like royalty.”

Noting the uptick in terrorist attacks in the West bank and Gaza Strip following the preceding prisoner releases, Indor said the Israeli government is ostensibly perpetuating a cycle of violence by agreeing to the terms.

“This is only creating more terrorism. [The releases] are teaching a big lesson: In the end, when you go by the system of law and not diplomacy you succeed for the benefit of society. That’s why the justice system was established – to ensure that people who have killed innocent people and are found guilty shouldn’t be released and celebrated because of [international] pressure.”

Asked what he would say to Prime Minister Binyamin Netanyahu if given the opportunity, Indor said he would restate the prime minister’s own words cautioning about the profound dangers of releasing terrorists.

“I would quote everything he wrote in his brilliant book A Place Under the Sun, about why it is dangerous to release terrorists,” he said. “He was right when he wrote it, and its message is still right.”

Acknowledging the acute pressure and hypocrisy Netanyahu is facing by the US government, Indor implored him to not yield to the duress.

“Be brave against the pressure from [US Secretary of State] John Kerry and the American government,” he said. “Tell them: ‘You don’t do this in your country, so don’t force us to do it in ours. American justice would not accept this, why should Israeli justice? Because Jewish blood is cheap?’” Observing the close-knit nature of Israeli society, Ortal Kramer, a 22-year-old college student, said she missed class to attend Sunday’s vigil to show solidarity with all Israelis who have been afflicted by terrorism.

“I think every person in our country knows someone personally who has lost a loved one to terrorism,” she said.

“My friend’s sister and father were killed at Café Hillel on Emek Rafaim [in 2003], and I know many more families who have suffered great loss.”

“I can’t believe this is the situation we are in,” she said.

“Every kid knows that we can’t bring peace by freeing murderers. This is a universal truth, not just in Israel.”

Moreover, Kramer contended that the releases are driving young Israelis away from the country by draining them of hope.

“We gave all we have to our country – our bodies, our loved ones – and the government keeps asking us for more without giving anything back,” she said. “A lot of people are saying that if the situation stays like this they won’t live here anymore.”

Kramer added that the releases are antithetical to Zionist ideology.

“It was our grandparents dream for us to live here and they wouldn’t have wanted us to leave because of this,” she said.

Indeed, Ortal Tamam, whose uncle was murdered by terrorists in 1984, said the prisoner releases not only negate Jewish values, but are robbing Israelis of hope.

“Right now it feels like there is no hope for anything in return – even for a better future,” she said. “I feel like not only have we betrayed our own values, but we’ve betrayed our country. We are teaching that it’s worthwhile to be a terrorist and kill people.”

Kramer continued, “I just don’t feel like this government represents me and I call on them to reverse their decision.”