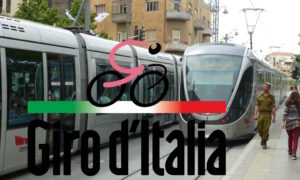 Organizers said Thursday that details of the exact route of the three-day leg in Israel will be announced next week, with Italian and Israeli ministers making the announcement in Jerusalem along with Spanish great Alberto Contador.

More than 175 of the world’s best cyclists will arrive in Israel for the race, one of cycling’s top three stage races along with the Tour de France and the Spanish Vuelta. For the first time in its 101-year history, the Giro will begin outside Europe.

The Omega Pharma–Quick-Step team at the team presentation for the 2012 Giro d’Italia in Herning, Denmark. – Photo: Kasper Sorensen\Wikimedia

Viewed by hundreds of millions across the globe, it will be the biggest sporting event ever held in Israel and is expected to draw tens of thousands of tourists and cycling enthusiasts.

“This is a hugely exciting moment for cycling and for Israel. An event of this magnitude is something that the country will always remember,” said Daniel Benaim, CEO and owner of Comtec Group, the Giro’s Israeli production company.

A delegation from the Giro d’Italia is currently in the country, scoping out locations for the race. The race was previously opened 11 times outside Italy, but never outside the European continent.

Contador will soon be arriving in Israel after ending his career in front of his home crowd at the Vuelta. Considered one of Spain’s greatest riders, the 34-year-old Contador won that event three times, along with the Tour de France twice and the Giro d’Italia twice. He was stripped of a third Tour victory for doping.