Threats of leaving the ruling coalition were made so far in the Israeli parliament in connection with the peace process, but on Saturday the threat came from another direction – a more social one

Israeli soldiers from an Ultra Orthodox battalion pray on the top of the ancient fortress of Masada in the Judean desert on March 23, 2007 – Photo: AFP

Yesh Atid party’s leader and Finance Minister Yair Lapid warned that he will leave the government if criminal sanctions on draft-evaders will not be stipulated in a new law.Lapid stressed that the sanctions will apply to all draft-dodgers, not only ultra-Orthodox men, who were thus far exempt from enlisting in the army on grounds of their religious belief.

In an interview with the Israeli Channel 2’s Meet The Press, Lapid said that an agreement with the HaBayit HaYehudi party, the religious Zionist party which objects to the criminal sanctions, could still be reached this week.

“There is a law that must obligate everyone, and everyone will have to obey it,” Lapid said. “We will not sit in a government that will not pass the draft bill, and it must be real. I won’t accept some kind of camouflage just to stay in the government.” 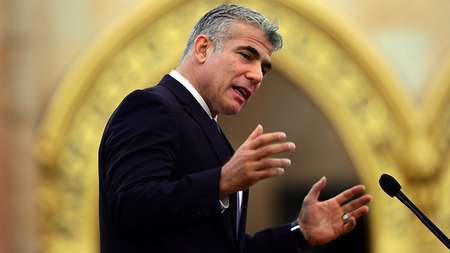 Haredi (ultra-Orthodox) Members of Knesset were not impressed by Lapid’s threat.

“We would be delighted if Lapid resigns from the government,” said MK Menachem Eliezer Moses of the United Torah Judaism party.

“We are working hard to ensure that the draft law does not pass at all and that if it does it will not include criminal sanctions. We would be happy if Lapid resigns as soon as possible so that we can stop the terrible damage that he has already done ​​since taking office.”

MK Meir Porush, also of United Torah Judaism, said that Lapid’s only goal is to increase the divisions in the Israeli society and see the haredim in jail.

“Lapid does not want haredim in the army, he would prefer to see them in prison,” said Porush, adding, “Haredi Judaism will not remain silent over the actions of the government, which seeks to place Torah scholars in prison. Haredi Judaism will fight and will continue to learn Torah, even if we have to go underground.”

Foreign Minister Avigdor Lieberman expressed hope on Friday that the recent bill to equalize the burden of service would not further divide Israelis.

Lieberman added that his Yisrael Beytenu party would support whatever proposal the coalition forged.

“What matters is keeping the nation together, not just serving in the army, which is an honor, not a burden,” he said. “Every young person must serve, whether it is in the army or in national service, whether he is Jewish, Muslim or Christian. There is no reason why an 18-year-old haredi man who does not want to serve in the army cannot serve his own community,” at a hospital, concluded the FM.