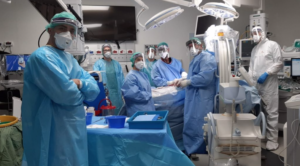 Bahrain and another Gulf state reached out to Sheba Medical Center at Tel Hashomer, expressing interest in the hospital’s response to the pandemic, and the United Arab Emirates’ ambassador to the United Nations said publicly that her government would be willing to work with Israel on a vaccine.

“I have heard leaders in the Gulf say over and over, ‘with our resources and wealth and Israeli innovation, we can create a vaccine and a cure’…They have seen this pandemic as an opportunity for cooperation between themselves and Israel,” said Rabbi Marc Schneier, who has extensive ties in the Persian Gulf as president of the interfaith dialogue organization Foundation for Ethnic Understanding. “There’s an opportunity to join forces here. So many issues transcend politics in the Middle East.”

Schneier and Yoel Hareven, director of Sheba’s International Division, said that Bahrain and another Gulf state, which they declined to name, have taken an interest in telemedicine or remote medicine innovations in Israel and the ways the Jewish state has responded to the coronavirus pandemic.

“We offered them any help they need, even if it’s connecting doctors or nurses, or sending teams to them, sharing logistical knowledge,” Hareven said. “Whatever help we can give our neighbors – we will do it happily.”

Hareven said the unnamed country is “central and different” in the Gulf and is “not one we’re used to hearing about,” adding that Israel is not known to have ties with it, which is why they are keeping a low profile.

“There are a lot of things happening above and below the surface,” Hareven said, noting that the governments in that region are very centralized, which means the contact with Sheba took place with the leaders’ approval. “They believe very strongly in the connection with Israeli medicine and Israel generally.”

Hareven, recounted that the hospital took part in the US-backed conference in Bahrain last year meant to promote investment in the Palestinian economy with an eye towards peace. At the time, Schneier connected Sheba’s director, Prof. Yitzhak Kreis and others with leading figure in the Gulf.

“Since then, we have been in touch with some of the people we met there. They plan to come visit us,” in Israel, Hareven said. “We’re trying to see how to promote medicine in the Gulf states and how medicine can be a bridge between what is happening here and there.”

Hareven called medical matters “the only non-political issue we can agree on.”

UAE AMBASSADOR to the UN Lana Nusseibeh said on Tuesday during a webinar hosted by the American Jewish Committee and the Jewish Insider that she is unaware of any current cooperation between her country and Israel, but added: “Our perspective on science and tackling this pandemic is that it shouldn’t know borders or boundaries… I’m sure there’s a lot of scope for cooperation; I don’t think we’d be opposed to it.”

Nusseibeh referred to Israeli scientific research on treatment for COVID-19, calling it “very exciting” and saying there is “potentially room for cooperation here.”

The ambassador said, responding to questions from Channel 13 reporter Barak Ravid: “I think public health space should be an unpoliticized space where we all try to pool our collective knowledge of this virus to improve the lives of many people around the world.”

Talk of cooperation with Gulf states on fighting coronavirus comes after years of closer ties between Israel and those countries, in light of their opposition to Iran and encouragement from the Trump administration.

Last week, US Ambassador to Israel David Friedman said he’s “very optimistic” about stronger ties between Israel and Gulf states in the coming years, and that they will likely come collectively, from a group of countries, rather than one making the first step.

“Allies with America could also be allies with each other; that’s the natural progression of the relationships,” Friedman said.

The public peak of these growing relations was a workshop titled “Peace to Prosperity” in Bahrain last year, meant to encourage investments in the Palestinian economy, but there have been reports – confirmed by Schneier – that Gulf leaders would be willing to meet with Israel’s leadership.

Anyone interested in learning more about Sheba Medical Center, such as treatments and procedures, are invited to visit its website at: https://www.shebaonline.org/