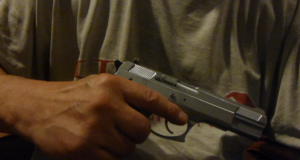 Mass shootings in the US are becoming routine and public places across the country may have little choice but to emulate Israeli gun laws to help prevent lunatic shooters from claiming so many innocent lives.

Mass shootings are nothing new in the United States, but their sudden rise is ballooning into a shocking nationwide epidemic. Many blame a toxic political culture that is accentuating divisions rather than commonalities between Americans, and the ease in which Americans can access guns, including automatic assault rifles.

Added into the mix is the multibillion-dollar entertainment industry that glorifies gun violence. This includes countless action and suspense movies, murder-mystery television series and first-person video games in which players for hours on end, day after day, “shoot to kill” as many enemies as possible in realistic computer-animated settings. This poisonous entertainment is proving to be an extremely well-funded and perpetual soft source of incitement.

On top of that is a growing epidemic of mental illness in the United States, as well as the frequent prescribing of anti-depression medications that have too often been known to have dangerous side effects, including suicidal thoughts and violent tendencies.

In many mass shootings incidents in the United States in recent years, multiple factors blended into a dangerous cocktail that has led individuals to commit the most heinous act any human could commit: the intentional murder of innocent victims.

While some of the recent perpetrators have been “white nationalists,” others have been jihadists, while others have been youth or other unsuspecting individuals that for one reason or another – or a combination of reasons – have simply snapped.

Israel, too, has seen its share of gun violence in the past several decades, in the form of nationalistic terrorism.

The perpetrators of this terrorism are almost exclusively Palestinians who have been regularly incited – in the more classic forms of incitement – by textbooks, television, social media and speeches by political and religious leaders that glorify and call for the murder of Jews. Much of this incitement is well-documented by organizations, including Palestinian Media Watch and Middle East Media Research Institute.

With rare exceptions, Jews in Israel – or in the United States, for that matter – are not prone to gun violence. (In Israel each year there are isolated cases of mafia-related violence. And while equally heinous and inexcusable, this violence tends not to be indiscriminate like the current trend of mass shootings or Palestinian terrorism.)

While Israel does not offer its citizens any “right to bear arms” within its framework of basic laws, guns are commonplace and part of the culture in Israel. With mandatory conscription, most Israelis have handled automatic weapons while serving in the military. Soldiers, including those who are off-duty, are often seen across the country carrying machine guns, while thousands of Israelis carry personal handguns.

A high percentage, if not a majority of terrorists who are caught in the act of, or attempting to commit murder, are neutralized by private citizens carrying weapons. During times of elevated terrorism, Israeli leaders including former Jerusalem Mayor Nir Barkat have called on citizens owning weapons to carry them.

While many Israelis have weapons, they are not available to everyone and anyone. To receive a gun license, one must meet several criteria. First, an individual must live or work in a geographic area deemed to pose a higher terror risk, such as Israeli citizens living in Judea and Samaria or close to Arab villages with a history of producing terrorists.

Next, a doctor, usually a general practitioner who has been treating an individual for many years, must complete a detailed health evaluation certifying that the applicant is both physically capable and mentally stable enough to carry a weapon. An applicant also needs to complete a shooting course with a certified instructor and demonstrate sufficient mastery of handling and shooting a weapon. Before a license is granted, a detailed security check is performed on applicants by Israeli authorities.

Once granted, a license then permits an individual to own and carry a single handgun, and the specific weapon purchased by the gun owner is embedded in the license. Only the licensee may use that specific pistol. If the individual wishes to change handguns, the license must be amended. Furthermore, the license permits the gun owner to store a maximum of 50 bullets at any given time. A licensed owner may carry a weapon exposed (open carry) or concealed without limitation.

The license must be renewed every two years and requires periodic shooting instruction and proof of proficiency. Anyone carrying a weapon must be able to present their license at any time.

Private citizens are not allowed to own assault weapons, which are only carried by military personnel with army-issued weapons and ammunition.

The rules of engagement are extremely strict and limited to life-threatening situations. If a terrorist is coming toward any individual with a weapon, a licensed private citizen may shoot. If the terrorist is no longer in possession of the attack weapon, a licensed private citizen or soldier could go to jail for firing a shot, even if the attacker was in the act of attempted murder just seconds earlier.

Unlike in the United States, a licensed gun owner may not shoot at a burglar or trespasser on private property unless there is a demonstrated immediate threat to the life of anyone on the property.

In addition to private citizens carrying weapons, uniformed and armed security guards, as well as metal detectors, are commonplace at the entrances of major shopping centers, schools, public offices, and institutions, as well as in places of organized public gatherings.

It is both socially acceptable and religiously permissible for synagogue congregants to carry weapons during services, including on Shabbat.

And while the presence of armed private citizens and security guards cannot eliminate the threat of attacks (nor are they in every vulnerable location), these critical measures significantly limit the number of potential victims during an attack. Most perpetrators are neutralized within the very first minute after a terrorist attack begins.

So as Americans seek to understand the nature of increasing gun violence in the United States, it is crucial to understand the dangerous combination of causes that lead to this deadly and horrific phenomenon, beyond common political attacks.

It also may be useful to look to Israel, which has significant experience dealing with terrorist attacks, for ways to control access to guns by those who are unlikely to respect their civilian purpose: to defend and not to take lives. American shopping centers and institutions across the country may have little choice but to emulate Israel in employing armed security to prevent shooters who have gone mad from attacking mass victims.