Chinese ambassador to Israel Gao Yanping voiced her admiration for Israel’s achievements in science and technology on Wednesday in a meeting with Science, Technology and Space Minister Yaakov Peri. 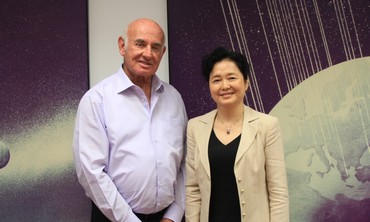 The ambassador, who was born in Nanjing and holds advanced degrees in law in addition to her bachelor of arts degree, told Peri that cooperation in these fields between the two countries will benefit both her own giant country and the small State of Israel. It will create new workplaces and infrastructure, she said.

Peri added that expanded ties “could become an engineer for significant growth for the Israeli economy.” The ambassador was accompanied by senior embassy officials to the meeting, which followed Prime Minister Binyamin Netanyahu’s recent state visit to China.

“Chinese society admires Israel’s many achievements, especially in the fields of science, research, development and technology,” she said, “thus we regarded all cooperation with you as a genuine asset to the Chinese people and the Israeli people.” Her government has set a goal to deepen scientific ties with Israel, she added.

“We have the world’s largest market and good foundations for scientific and technological development. Both countries together can create more work places, investments and development,” the ambassador stated.

Peri suggested that both countries increase their budgets for joint projects in the field of agricultural biotechnology, nanomaterials, water technologies and the development of alternative energy sources. The Israeli minister said there is “an understanding in Israel that the potential for institutionalizing scientific and technological ties with China can be a growth engine for the Israeli economy. China can serve as a broad and sophisticated platform for Israel’s R & D achievements.