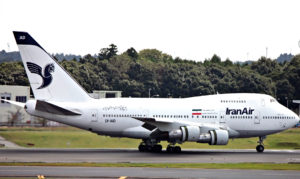 Another winner was Boeing. In one of the appendices of the deal, aerospace companies, primarily Boeing and Airbus, were given special permission to start doing business with Iran. Other US firms were still locked out, but Boeing and Airbus were allowed to begin negotiations with Iran, which was in desperate need of new commercial aircraft.

The result was a massive $17 billion deal to supply 80 aircraft to Iran Air, a company long suspected of participating in Tehran’s military airlift to terrorist organizations in Syria as well as Hezbollah in Lebanon, an enemy not just of Israel but also of the United States.

Now, two years later, a fascinating legal battle is taking place behind the scenes with the potential to not only kill Boeing’s multi-billion dollar deal with Iran, but also upend the entire nuclear agreement. It is a story that for the most part has stayed out of the headlines. But recent developments in a courtroom in Chicago seem to show that something bigger is brewing on the Iran-US-Boeing axis.

The story begins in 2003, when the Leibovitch family was on its way back home from a bar mitzva celebration in Jerusalem. As the car sped past the Eyal junction on Route 6, an Islamic Jihad terrorist cell, coming from nearby Kalkilya, opened fire, murdering seven-year-old Noam and seriously wounding her sister Shira, who had turned three that same day.

The Leibovitch family had recently returned to Israel from the US. The father, Shlomo, had taken a job as the deputy director of the Yemin Orde Youth Village in the Carmel Mountains, and as American citizens, they had the right under the US Foreign Sovereign Immunities Act to sue a foreign country.

Represented by the Tel Aviv-based Israel Law Center, the Leibovitch family filed a suit in 2008 against Iran for providing funding and logistical support for Islamic Jihad, the terrorist organization behind Noam’s murder.

In 2012, after years of proceedings, the court determined that Iran had supplied Islamic Jihad with “material support and resources for [its] campaign of extrajudicial killings” and awarded the family $67 million in damages.

Not surprisingly, Iran never paid. At the time, most of the Islamic Republic’s assets had already been frozen and seized in the US, though some of them were paid out in other rulings that had been brought against Tehran by Israeli victims of terrorism.

Another case, also brought by Shurat Hadin, was on behalf of victims of a 1997 double suicide-bombing in Jerusalem. The victims’ families were awarded $9m., and the money was seized from a San Diego defense company which years earlier had been paid by Iran for an old weapons deal.

With no money available to seize, Shurat Hadin founder Nistana Darshan- Leitner came up with an innovative idea – sue Boeing. The suit was filed shortly after the aerospace giant announced it had signed the multi-billion- dollar deal with Iran Air. It asked a Chicago federal court to order Boeing to reveal the terms of its deal with Iran, so it could determine if there were assets available to seize.

Boeing pushed back, telling the court that it could not disclose the details of the deal. Doing so, the company’s lawyers argued, would interfere with US foreign policy, undermine national security, and potentially undo the P5+1’s landmark nuclear deal.

While the court accepted Boeing’s initial request to ban revelation of the deal’s terms, Shurat Hadin fought back.

“This whole story was strange,” Darshan- Leitner told me this week. “Why would a commercial company try to hide the details of an agreement with a foreign country? Why is Boeing covering up for Iran?” Accordingly, the court in September ordered the US government to state its position on the sale and how it affected or didn’t affect national security. The deadline set for the Justice Department to respond to the court order was October 12, the day before President Donald Trump announced that he would not be certifying the Iran nuclear deal, setting into motion a new congressional review of the pact.

But when October 12 came along, the administration surprised the court and asked for a two-month extension to file its response. The court acceded and set a new date in January.

To Boeing’s credit, it has stated from the beginning that it would act in line with US government policy. Boeing is an aerospace company with the goal of making money for its shareholders. Its interest is and should be to sell planes and keep its assembly line going.

It also has a legitimate argument to keep the terms of its deals secret. These contracts contain details on pricing, plane specifications and technical data. It wouldn’t help the company for all of these details to become public.

It is now a waiting game, but the options are not looking good for either Trump or Boeing. If Trump tells the court that the Boeing deal is important for national security and therefore needs to remain classified, the president will be seen as contradicting himself.

Why would he allow the airplane deal to go through at a time when he is reviewing the Iran deal, reconsidering America’s participation in it and planning new sanctions against the Islamic Republic? On the other hand, if the administration tells the court that the deal is not important for national security and its details can be revealed, Boeing will find itself in a vulnerable position.

The Leibovitchs will be able to try and seize their money from the aerospace company, and other plaintiffs in other cases against Iran, still awaiting compensation, would be able to come knocking on Boeing’s door. The demands could be endless.

Then there is Trump’s promise to bring jobs to America. The 80 planes that need to be built at Boeing’s assembly plant in Seattle mean a lot of new jobs for thousands of Americans.

There is also the court’s pending decision.

If the Leibovitchs are ultimately allowed to seize some portion of the deal, it could end up killing the deal on its own. If that happens, Iran, whose motivation to enter into the nuclear deal was connected to its need for new aircraft, would have to consider whether it sticks to a deal that now does not allow it to purchase Boeing aircraft.

“Basically, however you look at it, the deal is in trouble,” explained Uzi Shaya, a former Israeli security official and expert on Iranian sanctions.

“Any decision that Trump makes will be tough for him.”

How this will play out remains to be seen. Iran is Israel’s bitterest of enemies and has for years, and still today, fueled and supported the terrorist organizations that surround the Jewish state.

Just this past Sunday, Hamas deputy chairman Saleh al-Arouri was in Tehran and announced that Iran has agreed to continue supporting the terrorist organization and its anti-Israel activities.

In the meantime, Boeing and Iran should consider their adversary. Darshan- Leitner has a track record of holding countries and terrorist groups accountable and finding ways to get them to pay.

There was the case involving a home in Queens owned by Iran, which was sold so the money could go to the family of Ira Weinstein, a butcher originally from the Bronx who was killed in a 1996 bus bombing. There was the case of the San Diego security company and several more.

Darshan-Leitner doesn’t give up that easily, and with the Trump administration already reviewing its nuclear deal with Iran, the momentum seems to be, for now, in her favor.