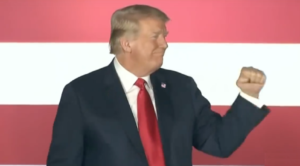 The US is not confirming the report at the moment, but the State Department hinted last week after the closure of the PLO’s mission in Washington that there would be further steps against the Palestinian Arabs.

Earlier on Sunday, the Lebanon-based Al-Mayadeen television reported that the US ordered the PLO envoy to the US, Husam Zomlot, out of the country.

According to the report, the visas for Zomlot and his family were cancelled, their US bank accounts were closed, and he was ordered to leave.

“The American authorities cancelled my visa and my family’s visa,” said Zomlot, “and closed our bank accounts. We’ve been ordered to leave Washington immediately.”

Zomlot and his family have reportedly left the country, and are en route to Ramallah, the PA-based Ma’an news agency reported.

PLO executive committee member Hanan Ashrawi blasted the Trump administration for the move, calling it “cruel” and comparing the move to “blackmail”.

“As if the announcement that the U.S. would close our office in Washington D.C. was not enough, this vindictive action by the Trump administration is spiteful. The U.S. has taken its attempts to pressure and blackmail the Palestinians to a new level,” Ashrawi said, according to the Wafa news agency.

Zomlot was briefly recalled from Washington in December for consultations, following President Donald Trump’s recognition of Jerusalem as Israel’s capital. However, Zomlot returned to Washington just one day later.