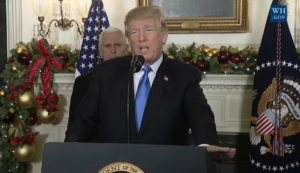 U.S. President Donald Trump plans to sign an executive order on Wednesday that would treat “Jewishness” as a nationality and not just a religion, making anti-Semitism subject to a law that bars discrimination on the basis of national origin at educational institutions that receive federal funding.

Hosting ‘Israeli Apartheid Week’ on U.S. campuses of higher education has been promoting anti-Semitism for over a decade, with the Jewish students taking the brunt of it by fellow students, student unions and their faculties. – Photo: Wikimedia Commons

The move is intended to target those colleges and universities that fail to combat anti-Semitism, a senior administration official said Tuesday.

In the order, Trump is expected to tell the Department of Education to consider the International Holocaust Remembrance Alliance’s definition of anti-Semitism – which can include criticism of Israel – when evaluating discrimination complaints under Title VI of the 1964 Civil Rights Act, which prohibits discrimination based on race, color and national origin.

One U.S. official said Trump’s order would make it clear that Title VI will apply to anti-Semitism as defined by the IHRA. That definition says anti-Semitism may include “targeting of the State of Israel” and singling it out for criticism above other nations.

The order, which is likely to draw criticism from free speech advocates, will broaden the federal government’s definition of anti-Semitism and instruct it to be used in enforcing laws against discrimination on college campuses, according to three U.S. officials.

Title VI bars discrimination on the basis of race, color and national origin at colleges and universities that receive federal funding. One official said Trump’s order would make it clear that Title VI will apply to anti-Semitism as defined by the IHRA. That definition says anti-Semitism may include “targeting of the State of Israel.”

Ignoring the atrocities of other countries, only Israel is singled out for a week of protests and sanctions as demonstrated here with a BDS display at DePaul University in Chicago. – Photo: AP

Previous attempts to clarify and codify the application of Title VI to anti-Semitic acts have become bogged down in debates over whether Judaism should be seen as race or is indicative of a national origin.

Free-speech advocates have also expressed concerns that a broader definition of anti-Semitism might be used to limit criticism of Israeli government actions.

Still, a second official insisted the order was not intended to limit freedom of expression and was not aimed at suppressing the Boycott, Divestment, Sanctions movement known as BDS that aims to support Palestinian aspirations for statehood by refusing to purchase Israeli products or invest in Israeli companies. The movement is on the rise, sparking tensions on many college campuses.

The Grand Mufti of Jerusalem, Haj Amin al-Husseini, on November 28, 1941, speaks with Hitler at the Reich Chancellory in Berlin. – Photo: Wikimedia

The movement, however, has received a bipartisan rebuke in the U.S. Congress and many states have passed anti-BDS measures.

Trump has urged allies to rein in the boycott movement, while its backers deny anti-Semitism charges and describe themselves as critical of Israeli decision-making, not Jews.

A third official said the order was a response to an alarming rise in the number of anti-Semitic incidents on campuses and would mean that Jewish students who are discriminated against for their religion have the same kind of recourse as black students who are victimized by racism.

The Republican Jewish Coalition applauded the move, with the group’s chairman, former Sen. Norm Coleman, calling it “a truly historic and important moment for Jewish Americans” and hailing Trump as “the most pro-Jewish president” in the nation’s history.

“I congratulate U.S. President Donald Trump on his intention to sign an executive order to combat anti-Semitism in U.S. universities and colleges and withholding federal funding from institutions that will fail to prevent anti-Semitism on their grounds,” said Katz.

“As part of the order, Judaism will be defined as both a religion and a nationality, enabling a more effective fight against the anti-Israel boycott movement on campuses.

“In addition, the administration is expected to adopt the IHRA’s definition of anti-Semitism which defines anti-Israelism as anti-Semitism. These are very significant steps in the fight against ongoing anti-Semitism and the boycott movements. I urge more countries to adopt similar measures.”

Trump delivered a speech on Saturday night that featured remarks from a recent New York University graduate who had accused the school of failing to protect its Jewish students from harassment.

On the other hand, Trump has been accused of trafficking in anti-Semitic tropes, including comments about Jews and money. But he has also closely aligned himself with Israel, including moving the U.S. Embassy from Tel Aviv to Jerusalem and taking a hard line against Iran.

The Anti-Defamation League’s Center on Extremism found white supremacist propaganda on campuses up 7% from the last academic year, which ended this May. Anti-Semitic incidents at colleges and universities, however, have slightly gone down with 201 recorded incidents in 2018 as opposed to 204 incidents in the previous year.

The ADL and the Academic Engagement Network released model guidelines for faculty in November after two instructors at the University of Michigan declined to write letters of recommendation for students seeking to study abroad in Israel.