Aylin Kocaman explains how it is essential for Turkey and Israel to act together if the problems in the Middle East are to be eliminated.

By AYLIN KOCAMAN
The view of one country’s government may not always agree with that of another, but such problems at government level among friendly countries are generally artificial and temporary. And they never reflect the general thinking and attitudes of the public.Turkey and Israel are two friendly countries. Two countries in the most important part of the world. And in the most inflammable and dangerous part of the world. But they also have other things in common. 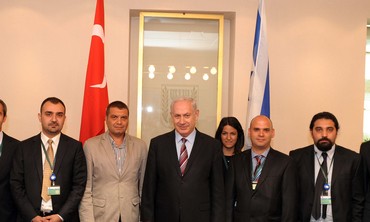 Materialist ideologies have never ruled the Turkish public, and the people have never grown selfish. The same with the Israeli public.

The Turkish people have always lived by the warm and loving side of religion that stresses friendship and brotherhood. As have the Israeli people.

The Turkish and Israeli people have always shared the same cultures, traditions and pleasures. Both peoples possess a beauty of heart and depth of soul which are very rare in the world. The peoples of both countries possess invaluable human values. Invaluable, because these are values the world longs for now.

Combined with their geopolitical positions, these shared characteristics impose major responsibilities on both countries. Surrounded by circles of fire, these two countries must come together. But why? The Middle East is a region dominated by mostly Arab countries.

But Arab countries have made grave mistakes and face numerous disadvantages. First, many of the Arab countries have surrendered to bigotry, not to true Islamic moral values. Various forces that implement traditions and nonsense under the name of Shari’a, or Islamic law, that portray violence and savagery as legitimate and call that Islam, that base themselves on anger instead of the true essence of Islam, which is love, and that regard women as second-class citizens are powerful in those countries.

The second problem in the region is the long-lasting effects of the Ba’ath party, the terrifying system that turned the peoples of the region toward Marxism, that made aggression and violence a necessity and that caused unrest and isolation for many years.

So long as weapons, and arms manufacturers, exist, there will always be war. War will either be produced artificially or someone will pave the way for it. This filthy sector is always kept alive in some way. One of the main places where this is put into action is the Middle East with its countries influenced by the Shanghai bloc.

That is the terrible situation of the Arab countries in the Middle East. They try to make the fine people there forget about love. They try to make them forget about freedom, friendship, affection and love. They try to convince the people there that war and killing their brothers is legitimate. They brainwash people with the ideology of the Ba’ath party using education and imposition and try to justify the filthy logic of slaughter. But the peoples of Arab countries are rising up against that foul logic. This is not a religious conflict. Nor a search for a national identity. It is merely people seeking love and liberation from dictators.

The peoples of these Arab countries in the region cannot overcome this wide-ranging problem on their own. They cannot oppose the Shanghai bloc, set up as a defense bloc against USA. And they cannot, alone, support an ideology opposed to the bloody ideology of the Ba’ath party. They are living under a despotic system. The destructive effects of this despotic system must be eliminated first. The people there need a helper, a guide, a liberator.

That is where Turkey and Israel need to join forces and become involved. First, this is needed because Islam commands believers who say “God is One” to be united. The Koran commands Muslims to be brothers with Jews and Christians, to show them affection and protect them and to grow stronger in unity with them. Anyone who maintains the opposite is lying.

Second, Turkey and Israel are the only two countries that have been purged of the bigotry in the region and that act through a religious conception of love, and far removed from Marxism. They must reverse the loveless education provided by dictators and the Ba’athist regimes. They must teach love to the people there. If lovelessness has been established through education of perverse ideologies, if killing is made easy through education, then education is needed to reverse the situation.

False ideas that depict killing as justified and that have been installed in people’s minds with neat effort over a long period of time must be replaced by true beliefs. That is why two devout countries such as Turkey and Israel that do not confuse bigotry with religion must come together as brothers, grow stronger against all movements of the antichrist and emerge as a force that can save people who are on the brink of ruin.

No dictator in the Middle East could shed blood in the face of two such powerful countries united with bonds of love and friendship.

No dictator could threaten any other country. No country could behave aggressively toward another.

Such a power would act like a shield against certain dictators who imagine there is no opposition to them.

The Middle East would immediately be pacified in the face of such a power. Neither women, children nor whole peoples would be oppressed in the Middle East; neither countries nor communities would be threatened with being wiped off the face of the map or being expelled; and there would be no wretched refugees forced away from their homes. Such a power would act as a deterrent against despots and also represent a huge force in terms of representing love and union.

This is not utopian. This is not difficult. It is what needs to happen and is very easy. The union of devout believers and supporters of love will give rise to an irresistible force. Two countries combining together and growing stronger in the Middle East, forming a powerful union of faith, will make for new blood. This force will be a most important step in the elimination of all threats from the world and once again making the world a place of love.

That is why this work falls to the governments and also to the Turkish and Israeli peoples. Governments should leave the artificial problems behind and should remember that separation will bring greater harm to both countries.

They should remember their big brother role and act according to this. And the people of those two countries must espouse union and friendship and raise this issue everywhere, taking no notice of difficulties and artificial problems.

Aylin Kocaman – Photo: from her blog

About the Author:
Aylin Kocaman graduated from Istanbul University, is a commentator and religious & political analyst at A9 TV Istanbul/Turkey. She is host of the Building Bridges show with the cooperation of US Network WTPN, a columnist for several online newspapers in Turkey, and a peace activist.

ANOTHER great post from Aylin Kocaman is:  The truth of the matter