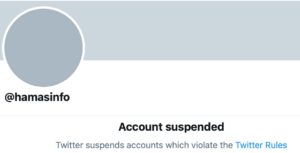 The move “appeared” to be Twitter yielding to “political pressure” after a bipartisan group of US lawmakers accused Twitter last week of violating US law in allowing content from US-designated terrorist groups to appear on the micro-blogging site. Congress ordered Twitter to suspend all accounts affiliated with Hezbollah and Hamas by November 2, Al-Manar reported.

The Twitter accounts in Arabic, French, English and Spanish were suspended with no prior notice.

Al-Manar stressed the channel’s “objectivity and accuracy in conveying truth,” in a post about the suspensions.

“There is no place on Twitter for illegal terrorist organizations and violent extremist groups,” said a Twitter spokesperson to AFP.

Al-Manar stressed that, in addition to its “resistance role,” Hezbollah “plays a big role in the Lebanese political life.”

“We may make limited exceptions for groups that have reformed or are currently engaging in peaceful resolution processes, as well as groups with representatives who have been elected to public office through elections, as is the case with parts of Hamas and Hezbollah,” said Carlos Monje, Twitter’s US director of public policy and philanthropy, in September.

Furthermore, a Twitter spokesperson told the Jewish media syndication site JNS last week that terrorist groups have no place on the social-media platform, and that the company “draws a distinction between the political and military factions of the organizations mentioned in the letter.”

This is not the first time Hamas-affiliated accounts have been closed by Twitter. In 2016, the party’s military wing, the Izz ad-Din al-Qassam Brigades, had its English and Arabic-language accounts closed down. Also in 2014, during the Hamas-Israel war in Gaza, Twitter shut down all of the group’s official accounts. However, Hamas reopened them almost immediately.

Omri Nahmias contributed to this report.