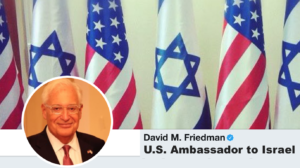 Friedman, the first U.S. envoy to serve in the recently opened embassy in Jerusalem, tweeted: “More than 2,000 years ago, Jewish patriots (Maccabees) captured Jerusalem, purified the Holy Temple and rededicated it as a house of Jewish worship. The U.N. can’t vote away the facts: Jerusalem is the ancient and modern capital of Israel. Happy Hanukkah from this blessed city!”

More than 2000 years ago, Jewish patriots (Maccabees) captured Jerusalem, purified the Holy Temple and rededicated it as a house of Jewish worship. The U.N. cant vote away the facts: Jerusalem is the ancient and modern capital of Israel. Happy Chanukah from this blessed city!

Friedman, who is Jewish, is among U.S. President Donald Trump’s close associates and is considered very pro-Israel. He served as Trump’s adviser on Israeli-related matters during his presidential campaign.

In December 2017, Trump upended decades of U.S. policy by officially recognizing Jerusalem as Israel’s capital. Several months later, he inaugurated a new embassy in the city.

These decisions triggered condemnation from Arab states and other countries, and the U.N. General Assembly passed a nonbinding resolution condemning Trump’s stance on Jerusalem. The U.S. reacted angrily to this, with Trump vowing to “take names” of those who voted against the U.S.

This week, Jews around the world will celebrate the miracles of Hanukkah. @FLOTUS Melania and I send our very best wishes for a blessed and Happy Hanukkah! https://t.co/LrnGcc86w4 pic.twitter.com/Kdjeyvkzmb

On Sunday, Trump sent out a Hanukkah greeting in which he vowed to defend the Jews and their traditions. “Melania and I send our warmest greetings to our Jewish brothers and sisters in the United States, in Israel, and around the world celebrating Hanukkah,” Trump wrote.

“For eight nights, Jewish families and friends will come together to engage in the lighting of the menorah. This special tradition started more than 2,000 years ago during the rededication of the Holy Temple in Jerusalem, which followed a trying period when Jews were persecuted for practicing their faith.”