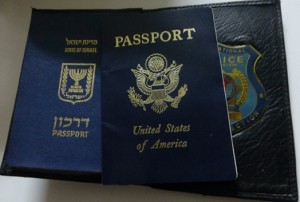 52 Congressional lawmakers ask the Secretary of State in their letter to enforce a law passed by Congress in 2002 that requires the State Department to record Israel as a Jerusalem-born citizen’s birthplace on his/her passport.

Almost seven years after the parents of Menachem Zivotofsky, an American born in Jerusalem, unsuccessfully sued the State Department to have “Jerusalem, Israel” listed as his place of birth on his U.S. passport, 52 members of Congress are calling on Secretary of State Rex Tillerson to reverse long-standing policy on the issue.

Rep. Ron DeSantis (R-Fla.) is one of 52 members of Congress asking to change long-standing U.S. policy on Jerusalem – Photo: Wikimedia

In a letter to Tillerson, the delegation, led by Rep. Ron DeSantis (R-Fla.) argued that a change in State Department policy would not contradict U.S. policy, the Washington Free Beacon reported. The State Department holds that recognizing Israeli sovereignty over Jerusalem would harm the U.S.’s ability to advance a Middle East peace process.

“If you institute the policy we are requesting, there will be no perceptible geopolitical impact, but such a policy will be meaningful to a number of our fellow citizens,” the lawmakers argued. “It would honor the individuals’ personal dignity and cherished personal identification with Israel as his place of birth.”

In the letter, the delegation noted that a law passed by Congress in 2002 requires the State Department to record Israel as a Jerusalem-born citizen’s birthplace on his/her passport.

“The State Department, under the Bush and Obama administration[s], refused to comply with this congressional mandate,” they said.

In 2015, the Supreme Court struck down the law, citing the possibility it could interfere with a president’s power to dictate U.S. foreign policy. The lawmakers insisted that reversing U.S. policy on the matter “would not contravene the Supreme Court’s decision.”

“This is an important opportunity for the executive [branch] to unite with Congress and speak with one voice regarding the birthplace designations on the passports of Americans born in Jerusalem,” the letter said.

“We urge you to issue a new policy that will effectuate the will of Congress, as well as honor the personal preferences of thousands of Americans, with no threat to the president’s authority and power, or to our country’s foreign policy.”

According to the Washington Free Beacon, the lawmakers believe Trump may comply with their request, given his stated goal of moving the U.S. Embassy in Israel from Tel Aviv to Jerusalem.