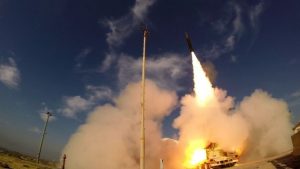 The U.S. Missile Defense Agency, along with Israel’s Defense Ministry, IAI & IAF conducted a successful test of the Arrow 3 interception system, which intercepts & eliminates incoming ballistic missiles outside the atmosphere.

The Homa administration of the Israeli Defense Ministry, together with the U.S. Missile Defense Agency (MDA), on Monday morning at 2:30 a.m. conducted a successful flight test of the Arrow 3 system, which intercepts ballistic missiles outside the atmosphere.

The test was conducted in central Israel, led by the Israel Aerospace Industries (IAI) and with the participation of the Israel Air Force.

The Arrow 3 interceptor was launched and successfully carried out its mission.

The Arrow system is a central component of the multi-layered defense system developed by the Ministry of Defense through the Mafat/Homa administration. The system is based on four operational defense layers: the Iron Dome system, the Magic Wand system, the Arrow 2 and the Arrow 3 systems.

The success of Monday’s test constitutes an important milestone in Israel’s operational ability to defend itself against existing and future threats in the region.

The Arrow 3 system was delivered to the Air Force for operational use in January 2017.