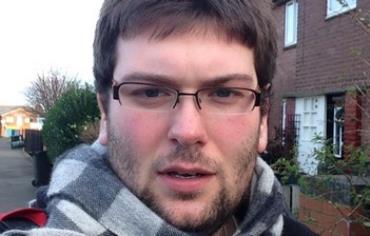 Spedding defines himself as an activist against anti-Semitism and in favor of finding a peaceful resolution to the Israeli-Palestinian conflict.According to Sky News, Spedding arrived at Ben Gurion Airport on Thursday on a flight from London’s Luton Airport. At immigration, he was taken to an interview room where he was subjected to a full body search and interrogation.Immigration officers took Spedding’s phone and went through its contents for four-to-five hours, copying content from it, according to Spedding, who kept his social media followers up to date with live updates.

“Just noticed Israeli security went through the email address I use for Alliance Party matters – they read our party proposals (confidential for party only) to the Haass talks,” he wrote on Facebook.

He also said on Twitter that he has been repeatedly threatened by airport security with nine days in detention and a permanent ban from Israel.

“It’s a shame that Israeli authorities feel it necessary to put such serious pressure and threats on me,” he wrote.

Following the interrogation, Spedding was told he would be deported and barred from entering the country for 10 years.

While Sky News reported Spedding’s detention and deportation were because of posts he made on Facebook and Twitter prior to his arrival, security at Ben Gurion airport did not specify to him what posts warranted the interrogation.

He said he will be “seeking legal recourse through [the] Israeli court system” against the ban.

Spedding, an active youth member of Northern Ireland’s Alliance Party and a Huffington Post columnist, traveled to Israel in order to meet with Israeli politicians and NGOs.

He founded and served as Vice President of the Palestine Solidarity Society at Queen’s University in Belfast, and joined the Holy Land Trust – an NGO that “aspires to strengthen and empower the peoples of the Holy Land (in particular Israelis and Palestinians) to engage in spiritual, pragmatic and strategic paths that will end all forms of oppression.”

Spedding said the incident will not deter him from continuing his “nonviolent activist work.”

“I want to say that this event in my life only strengthens my resolve to love everyday Israelis,” he wrote.

“It’s the regime in power here that considers nonviolence, human rights and accountability to be ‘integral security threats,'” he added. “This entire process is designed to intimidate and humiliate activists and human rights workers.”

“My mission in Israel – Palestine [is] always for just, peaceful conflict resolution,” he said. “I hope one day Israel can learn from lessons of Northern Ireland Peace process and my own political party in particular.”

Talking to Sky News, Israeli journalist Dimi Reader from 972mag.com said Spedding is “one of the few activists I know who, while unequivocally recognizing the Palestinians’ plight as the most acute and urgent of the conflict, is also genuinely and consistently concerned with creating a liveable and sustainable future for all those living in Israel-Palestine.”

Reader added that Spedding arrived in Israel in order to “discuss lessons from Northern Ireland, especially the transition from armed struggle to political process, with activists and officials in Israel and in the West Bank.”