Secretary General Ban, at debriefing of the UN Security Council, “The scale of the destruction in Gaza has left deep questions about proportionality & the need for accountability.”

NEW YORK — Fresh off a Monday meeting with Defense Minister Moshe Ya’alon, UN Secretary General Ban Ki-Moon debriefed the UN Security Council on Tuesday morning on his recent trip to Israel, Egypt and the Palestinian territories, and said that he would push forward on an investigation into the destruction and damaging of UN-owned buildings, including incidents when Hamas weapons were found in UN schools. 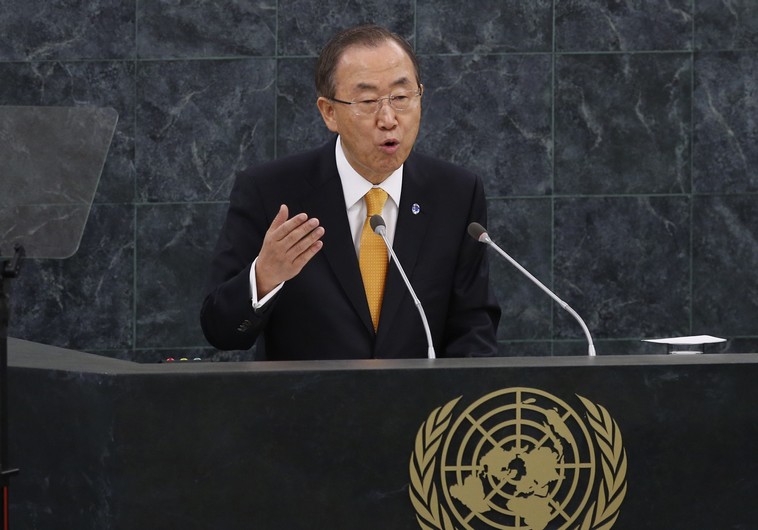 Ban recounted seeing “mile after mile of wholesale destruction” in Gaza, and his visit to the UN refugee camp Jabalia, which was shelled during Operation Protective Edge.

“I look forward to a thorough investigation by the Israeli Defense Forces of this and other incidents in which UN facilities sustained hits and many innocent people were killed,” he said. “I am planning to move forward with an independent Board of Inquiry to look into the most serious of those cases, as well as instances in which weaponry was found on UN premises.”

Repeating a line he told journalists last week, Ban said, “I fully understand the security threat to Israel from rockets above and tunnels below.  At the same time, the scale of the destruction in Gaza has left deep questions about proportionality and the need for accountability.

Ban’s Spokesman Stéphane Dujarric told reporters at the daily briefing that the board of inquiry is a standard procedure, led by the secretariat, that is put in place whenever there is damage to UN property or premises. Dujarric did not have a short list of who would be on the board or a time frame yet, other than that Ban was “clear on his intention to go forward with it in short order.”

“I assume it will involve some travel,” Dujarric said in response to a question from a reporter about what being on the board entails. “These are routine things, some get more attention than others. There was one after the last Gaza operation, and there have been others.”

In response to a question about Ban’s meeting with Ya’alon and whether the defense minister indicated if Israel would cooperate, Dujarric said “We would expect any member state, whether it’s Israel or the Palestinian Authority to cooperate fully.”

In his meeting on Monday with Ya’alon, Ban confirmed his intention to establish a board of inquiry, and welcomed Israel’s support in bringing reconstruction materials into Gaza. Dujarric did not have any comment on assertions by Hamas that materials now coming into Gaza under a UN mechanism will be used for rebuilding the destroyed tunnels into Israel.

“The monitoring mechanism is used to make sure that materials are used to construct homes,” he said. Ya’alon had said in his own readout of the meeting that Israel would not cooperate with the UN if the tunnels were rebuilt.

“We hope that Israel and the Palestinian government of national consensus continue to cooperate fully with the UN in the implementation of the mechanism to deliver much-needed resources into Gaza,” Dujarric said.

The spokesman also did not have a comment yet on the death of two young girls who were hit by a settler in his car.

In his statement to the Security Council, Ban said he hoped the recent Cairo conference, during which $5.4 billion was raised for Gaza, would be “the last Gaza reconstruction conference.”

“There is no hope for long-term stability in Gaza without addressing the underlying causes of the conflict: an end to the occupation that has grinded on for nearly half a century, a full lifting of the blockade on the Gaza Strip and effectively addressing Israel’s legitimate security concerns,” Ban said.

Israeli’s deputy ambassador David Roet, in his statement, pointed out “Israel does not occupy Gaza.” As for the board of inquiry, Roet also reiterated to the council the Israeli position that the UNRWA schools that were targeted were “turned into rocket storehouses, where terrorists fired rockets from just steps away.”

Palestinian ambassador Dr. Riyad Mansour, in his address, paid tribute to the eleven Palestinian UNRWA staffers who were killed during Operation Protective Edge, and called the onslaught a “criminal war.”