The UK’s The Guardian reported that officials are taking bribes to produce more concrete than is needed, in order to sell on the black market.

Barely four months after a bloody conflict battered Gaza, experts warn that a new war could be in the offing if reconstruction is not accelerated and Palestinian divisions remain. 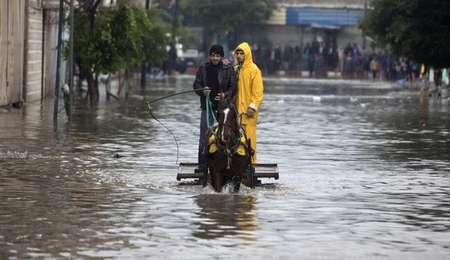 Palestinian men in a horse cart make their way through a flooded street in Gaza City on November 27, 2014 – Mahmud Hams/AFP

Since the end of the deadly 50-day war between Israel and Hamas, which killed nearly 2,200 Palestinians and 73 Israelis, little has changed on the ground in Gaza.

Swathes of the territory lie in ruins and tens of thousands of people remain homeless.

With reconstruction still conspicuous by its absence and talks to bolster the August truce repeatedly postponed, frustration is growing in Gaza — and with it the danger of a new outbreak of violence.

Last week, as Hamas militants paraded through Gaza with rocket launchers and missiles in a show of force to mark the 27th anniversary of the Islamist group’s founding, they were quick to warn that the situation was unsustainable.

“If there is no reconstruction of what Israel destroyed, we warn you that there will be an explosion,” warned the Ezzedine al-Qassam Brigades, Hamas’s military wing.

“If our demands are ignored, there will be consequences for the enemy, its people and its leaders.”

The glacial pace of reconstruction is the most immediate concern for Gaza, where UN figures show more than 96,000 homes were damaged or destroyed in the war, leaving 100,000 people homeless. 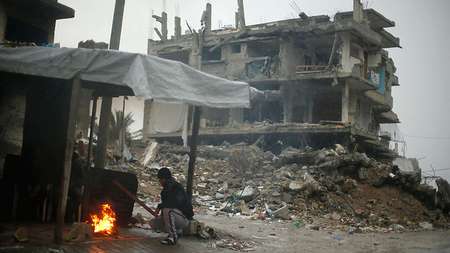 After the war, the UN brokered a mechanism which would allow such goods in while ensuring they do not fall into the wrong hands.

Palestinian officials say Israel has effectively blocked reconstruction by limiting supplies entering Gaza, but diplomatic sources say the UN-brokered mechanism has taken longer than expected to get up and running.

During a recent visit in December, UN special envoy Robert Serry voiced of his concern about the slow pace of the reconstruction effort amid “dire” conditions.

“[The] difficult issues, coupled with insufficient financial assistance from donors, have only worsened the atmosphere in an already devastated Gaza,” Serry said, adding that he was “gravely concerned”.

The British newspaper The Guardian also reported that officials are taking bribes to produce more concrete than is needed in order to sell on the black market.

Maher Khalil, a manager at one of Gaza City’s largest warehouses told The Guardian that “We told the UN inspectors who came to see us we can only check what is going on inside the warehouse, not what is happening outside. Inside we sell the concrete for 500 shekels [£81] a tonne. Outside they sell it for 1,600.”

“It is a disgrace what is happening,” said economist Omar Shaaban. “The new reconstruction mechanism has reproduced the Israeli siege of Gaza, only this time it is the UN that is regulating it. The UN is trading stability for cement – and not very much of it. And most of the cement that is coming in is being sold on the black market. Israel knows it. Serry knows it. The mechanism was a license for corruption. It is a license to prolong the siege. It is a license for big salaries for the UN officials running it. What is absurd is that none of it is preventing Hamas rebuilding.”

“If it remains frozen in terms of reconstruction, war will be the only option. Hamas will have no choice,” he said. 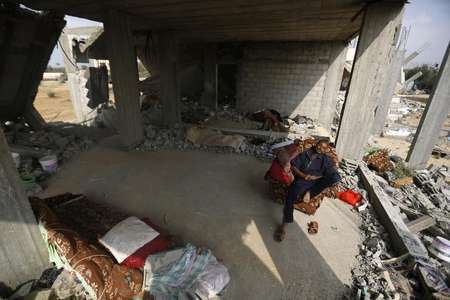 A Palestinian rests on November 12, 2014 inside the rubble of his family’s home which was destroyed during the 50-day Gaza war between Israel and Hamas-led militants in the Gaza Strip – Mohammed Abed (AFP)

But officials say that if Gaza is to be rebuilt within three years, it would need to be receiving at least 7,000 tonnes — or 175 truckloads — every day.

“The options are few and very difficult, ranging from bad to worse. As Israel slows the entry of building materials, Egypt closes the (Rafah) border and reconciliation fails to be implemented,” Mudallal said.

Before the war, Hamas found itself under increasing pressure from Egypt which dealt Gaza a harsh blow by destroying a network of cross-border smuggling tunnels and closing the Rafah crossing, triggering a major financial crisis.

In a bid to ease the pressure, Hamas signed a unity agreement with Fatah in the hope that the Palestinian Authority would facilitate payment of its Gaza employees.

But the deal has never been properly implemented, and tensions between the two has only festered.

“The likelihood of war is there,” said Naji Sharab, a politics professor at Al-Azhar University.

“If the political and internal situation continues like this and Hamas does not find a way out, then it might decide it has no other option” than war, Sharab said.

Oxfam’s regional director Catherine Essoyan echoed the worries of the UN, “it is deplorable that such little progress has been made given the enormous scale of needs and massive destruction. People in Gaza are becoming increasingly and understandably frustrated at the lack of progress.

“The international community has repeatedly failed the people of Gaza; it must not fail them again at such a critical time.”