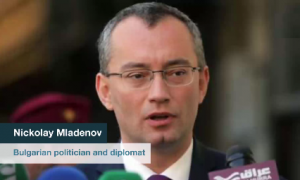 According to a UN statement, Mladenov painted a troubling picture of the situation in the region and said that the conflict has now arrived at “a pivotal point.”

Israelis and Palestinians must now actively shape their future – with the dedicated support of the international community – “before the opponents of peace decide their fate for them,” he said.

Mladenov called on leaders on both sides to “show a political will to their people and stand up to incitement and the radicals among their own constituents.”

“Only genuine progress towards just peace that allows the people of Israel and the people of Palestine to live side by side in safe and secure borders will end the bloodshed and counter the rise of extremism,” he said.

He then blasted Israel’s “settlement enterprise” and said that it continues to be an “impediment to peace”, though he also admitted that some Palestinian factions continue to glorify violence and terror. Mladenov urged both sides to stop activities that undermine the peace process, the UN statement said.

Over the last year, the United Nations, the United States, Russian Federation and the European Union, which comprise the diplomatic Quartet on the Middle East peace process, have engaged actively in seeking a way forward out of the deadlock, he noted.

The statement also pointed out that the Quartet has sought how to preserve the two-state solution, and create the conditions that would allow the parties to return to meaningful negotiations. Meeting at the Principles level last week in Munich, the Quartet decided to prepare a report on the status quo, including recommendations on the way forward.

The report should help build international consensus for the way ahead, said Mladenov.

While Mladenov specifically singled out Israel’s presence in Judea and Samaria, Kol Yisrael radio reported on Thursday night that no mention was made during the meeting of the demand by Israeli ambassador Danny Danon to condemn Hezbollah leader Hassan Nasrallah for his threats against Israel and Haifa earlier this week.

In fact, the radio station noted, the issue of Nasrallah’s remarks was not even on the agenda of the meeting.

This is not the first time that the UN envoy Mladenov has singled out Israel for criticism. In July, he told the Security Council that “the two-state solution is on life-support, slowly dying a death ‘by a thousand cuts.’”  At that time, too, he condemned Israel for “unilateral activities”  such as “settlement construction”.