UN to Israel: Release our employee who illegally siphoned aid money to Hamas 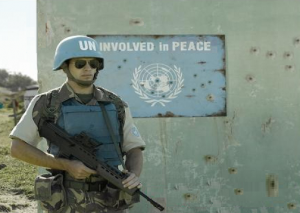 The UN’s Office of Legal Affairs (OLA) sent a letter to Israel’s Ambassador to the UN, Danny Danon, requesting the release of Waheed Al-Bursh, an UNDP worker who was arrested in July for assisting the Hamas terror organization, claiming he should receive diplomatic immunity.

“Israel operates according to the law, and we continue to do so in this case as well,” said Ambassador Danon in response to the letter. “We do not grant immunity to terrorists trying to harm our citizens.”

The UN claimed that any employees of the organization should receive the privileges of diplomatic immunity by local authorities and that until Al-Bursh’s release from prison he should be granted visits by the organization.

In recent weeks Ambassador Danon has been in touch with international aid organizations operating in the Gaza Strip regarding implementing effective mechanism for recruiting new workers, and to prevent funds intended for humanitarian use from reaching Hamas.

“The UN and other organizations must implement a comprehensive reform of the humanitarian aid mechanism in Gaza,” said Ambassador Danon, “Any dollar spent, and any local hire by an international organization, must be monitored ensure they fulfill the purpose of aiding the residents of Gaza and not fund terror activities.”